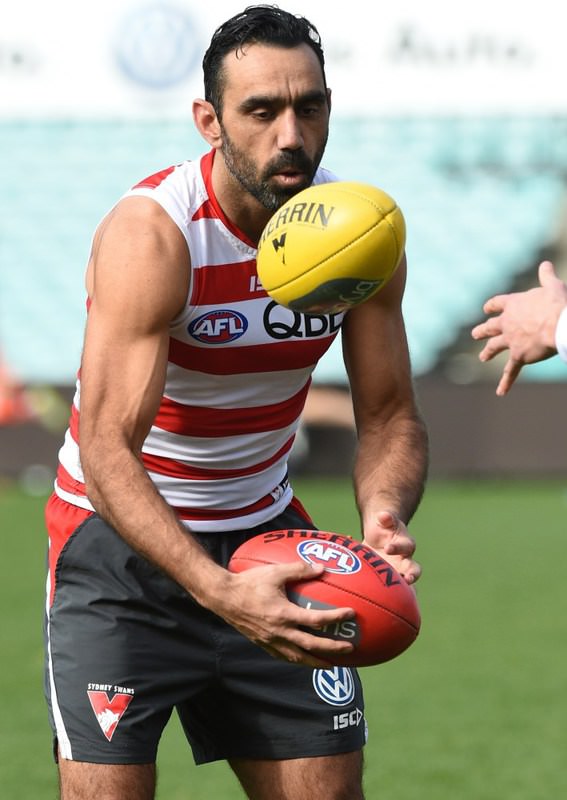 by Anadolu Agency Aug 05, 2015 12:00 am
An indigenous footballer is at the heart of a nationwide racism furor after a campaign of unrelenting harassment that culminated last weekend in a torrent of abuse by fans of the opposing team. The Sydney Swans versus the West Coast Eagles game sparked a booing frenzy directed at Australian Football League (AFL) player Adam Goodes, whose Aboriginal mother was one of the Stolen Generations. ABC Grandstand commentator Gerard Whateley labelled the booing "a shameful moment in AFL history" and said he feared Goodes may be "booed into retirement." Goodes has triggered a storm of controversy by championing his indigenous background on and off the field.

In May he celebrated a goal with an Aboriginal war dance that featured a spear-throwing gesture and a war cry directed at the rival team's supporters. His actions sparked an unprecedented backlash - critics condemning the performance, labelling it violent, aggressive and confrontational. Goodes maintained it was a victory dance, denying it was retaliation for the merciless booing he'd been subjected to during a match the previous week. "It's an Indigenous Round and I'm proud to be Aboriginal," he told Channel Seven.

The debate has divided the country, many Australians insisting that their dislike of Goodes is about the man not the color of his skin. Legendary cricketer Shane Warne bought into it tweeting: "The public can boo or chant whoever's name they want! It's nothing to do with being racist." Australia's Race Discrimination Commissioner Tim Soutphommasane disagrees. "During the match last weekend spectators were ejected because they accompanied the booing with racial slurs and epithets directed at Adam Goodes," he told Anadolu Agency. On Sunday, former Australian of the Year Ita Buttrose - one of Australia's most distinguished media identities - expressed her unreserved support for Goodes and urged critics to show some understanding. "Try walking in Adam's boots for a couple of weeks," she told Anadolu Agency. "We have no idea what it's like to endure the discrimination that Adam and so many other indigenous Australians have [and have had] to suffer." Buttrose is adding her voice to the political, sporting, business, community and indigenous leaders who have weighed in behind the embattled veteran player - a star in the AFL, and also a former Australian of the Year.

Goodes' supporters include Prime Minister Tony Abbott, actor Hugh Jackman, billionaire James Packer and Sydney Premier Mike Baird and Melbourne Premier Daniel Andrews. Other well-known figures such as actors Cate Blanchett, Hugo Weaving, Richard Roxborough and Peter Phelps, and opposition leader Bill Shorten and Greens Immigration spokesperson Sarah Hanson-Young have signed on to a social media campaign #istandwithadam. There have also been widespread gestures of support for Goodes over the weekend across all Australia's sporting codes. Players wearing sporting Indigenous Round shirts, red, yellow and black arm bands to represent the Aboriginal flag and fans waving anti-racism messages from all sporting arenas demonstrated they were standing alongside Goodes. The round celebrates the contribution Indigenous footballers have made to the game.

Opponents have highlighted, however, that their dislike of the player is not just about recent behavior. They maintain it harks back to incidents in 2013 when, during the opening match of the AFL's annual Indigenous Round, Goodes challenged a 13-year-old girl who referred him to as "an ape." He was criticized for singling the girl out and embarrassing her. Goodes subsequently explained that he didn't realize her age but went on to argue that racist taunts shouldn't be ignored, regardless of who makes them. The girl later spoke to Goodes and wrote him a letter of apology, saying she wasn't aware that the word was racist.
RELATED TOPICS