Moment of truth for Fenerbahçe 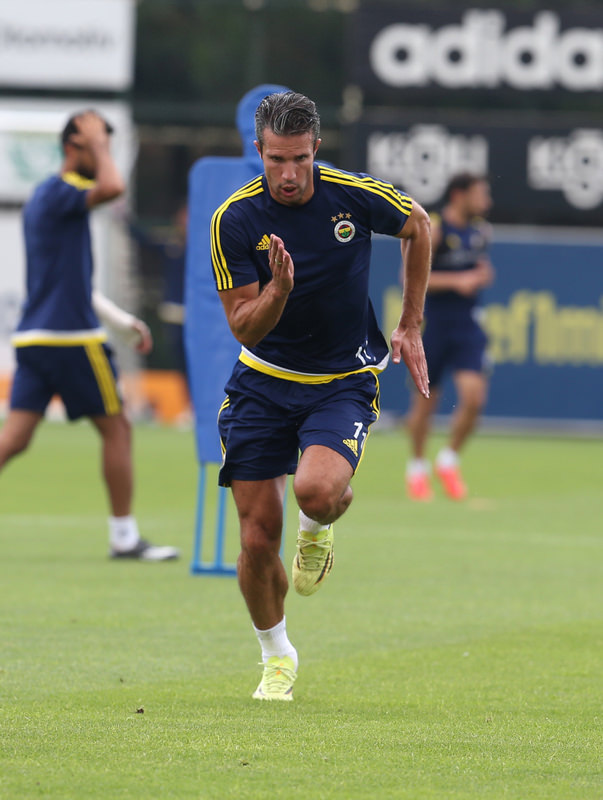 Star striker Van Persie is expected to play against Shakhtar Donetsk.
by Hakan Baş Aug 05, 2015 12:00 am

Having spent enormous amounts of money investing in famous stars, Fenerbahçe have two main goals: To participate in the Champions League and earn a fourth Super League star. Today the first aim is to defeat Shakhtar Donetsk

Fenerbahçe and their fans have waited two years for European action and are thirsty to make up for lost time after a two-year suspension incurred by the UEFA after the club's infamous match-fixing scandal. And what's more is that Fenerbahçe have never been so ambitious about doing well domestically and in the Champions League. Under these circumstances, Fenerbahçe will take on Ukraine's Shakhtar Donetsk today in Lviv, Ukraine. At 9:45 p.m., Fener fans' hearts will be beating fast. This match is deemed so vital that Fenerbahçe President Aziz Yıldırım has promised the footballers 7.5 million euros in bonus money should they win. It reveals the importance of the game given that the chairman is not exactly known for handing out lavish sums of money. The club signed world-famous Italian Manager Giuliano Terraneo as director of football and mostly thanks to his efforts and personal charisma the club managed to sign stars such as Nani, Robin Van Persie and Simon Kjaer.

They have two main goals: First, to obtain a fourth star for winning a 20th Super League title - an honor that went to Galatasaray last year, a fact that rankles with the Fener faithful. And the second is to advance in the world's most lucrative football tournament. Fener fans have missed a lot of quality Champions League action since 2008 when the team advanced to the quarter-finals.

Now, Fenerbahçe have arguably the strongest squad in the club's history. And if they can eliminate Shaktar, they will gain both the right to advance to playoff stage and guarantee participation in the UEFA Europa League if they are not be able to jump the hurdle of the playoff stage. If they qualify for the Champion League, they will earn an enormous sum of money, which is very important to balance the budget after their spending spree.

In the first leg in Istanbul last week, Fenerbahçe drew against Shakhtar Donetsk 0-0 and lost an important advantage. Fenerbahçe will be able to qualify if they manage to win or have a score draw. If the match finishes 0-0, the game will go into extra time. If they draw again, the winner will be determined by penalties. The match will be refereed by German Felix Zwayer.

Fener's new transfer Şener Özbayraklı will be able to play against Shakhtar after he served his suspension. But important midfielder Gökhan Gönül cannot play due to injury.

It is expected that Fenerbahçe's coach, Vitor Pereira, will not change the side that he sent onto the field in the first leg. Fenerbahçe's probable lineup will be: Volkan Demirel as goalkeeper; Şener Özbayraklı, Bruno Alves, Simon Kjaer and Caner Erkin in defense; Josef de Souza, Mehmet Topal or Raul Meireles and Luis Nani in midfield. The forward spots will be filled up by either Robin Van Persie, Moussa Sow, Diego Ribas or Jose Fernandao.

The match will be played in Lviv, because of the ongoing civil war in Ukraine. Lviv is 1,200 kilometers away from Donetsk, which is the home of the Ukrainian team.

Fenerbahçe's Caner Erkin said in an interview on FB TV, "Fenerbahçe is a more qualified team than Shakhtar. They have fast players and this is their biggest advantage. So we have to move fast both in attack and in defense. I believe we will clear this hurdle."

Meanwhile the UEFA says it dismissed Fenerbahçe's protest against Shakhtar Donetsk for fielding a player in a Champions League qualifying match who previously tested positive for doping at the Copa America. The UEFA said Shakhtar's Braziianl midfielder Fred had not been suspended by South American confederation CONMEBOL when the first leg was played. Still, Fred is unlikely to play today because of the doping case. Fred tested positive for a banned diuretic with Brazil at the Copa America in Chile in June. The substance, hydrochlorothiazide, can hide the presence of other drugs. Shakhtar acknowledged that they selected Fred to face Fenerbahçe in Istanbul despite UEFA advice.