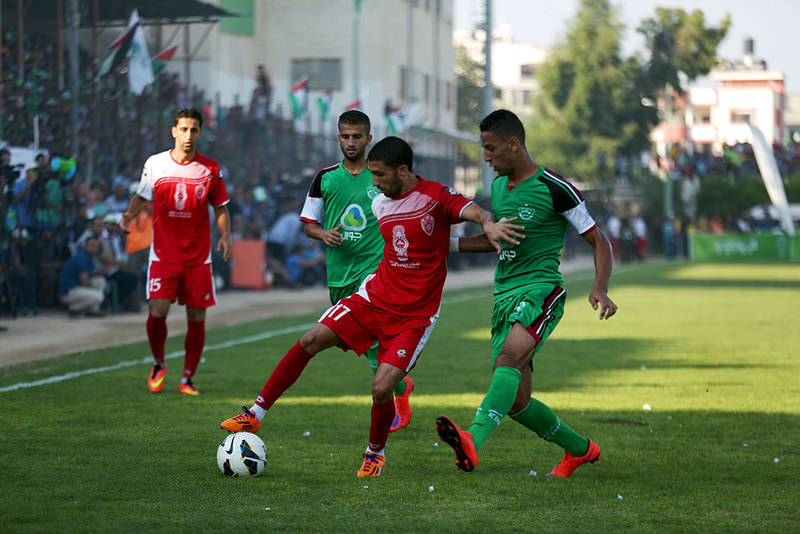 by Daily Sabah Aug 07, 2015 12:00 am
The West Bank's Ahli Al-Khalil crossed the Gaza Strip, which is blockaded by Israel, for the first time in 15 years to play with Al-Ittihad Shejaia in the Palestinian Championship Cup yesterday. Mohammed al-Amsi, assistant secretary general of the Palestinian Football Association told AA that "The West Bank league champion Ahli Al-Khalil entered Gaza by crossing the Beit Hanoun Border Gate in order to play with the Gaza Strip league champion Al-Ittihad Shejaia to win the Palestinian Championship Cup."

A team of 30 people including Italian football manager Stefano Cusin, 21 football players and technical, administrative and press members entered Gaza, after both teams were given the necessary permission while crossing the West Bank and the Gaza Strip to play in the Palestinian Cup.

Reminding that Israel didn't give permission for the games that were meant to be played on Aug. 4 and Aug. 8, Amsi said that they called on FIFA to stop Israel's discriminative practices against Palestinian football.

The first game between the two teams was played at Yarmouk Stadium in Gaza on Thursday and the match ended 0-0. The return match in the West Bank will be played at Hussein Bin Ali Stadium in Aug. 9.

Moreover, the Youth and Sport High Council in Gaza hosted a dinner for Ahli Al-Khalil after their 15-year absence from the area. Abdusselam Haniye, a member of the council, said at the event, which saw club managers, footballers and other officials in attendance, that Ahli Al-Khalil's visit to Gaza emphasized the unity in Palestinian sport despite political disagreements. Haniye said that the game played between the two champion teams would provide an opportunity for the footballers in Gaza to participate in the Asian Cup by getting out of Israel's blockade. He also added that he hoped the union of Palestinian sport would make a contribution to actualize the national union.

The team that wins the Palestinian Championship Cup will participate in the Asian Cup. Yesterday's final in the Gaza Strip was the first such match since 2000, when a popular uprising erupted against Israel's decades-long occupation that has seen thousands of Palestinians killed. Palestinian football has been divided due to the political turmoil in the nation. The football system is divided into the West Bank Premier League and the Gaza Strip League. Each league includes 12 clubs.