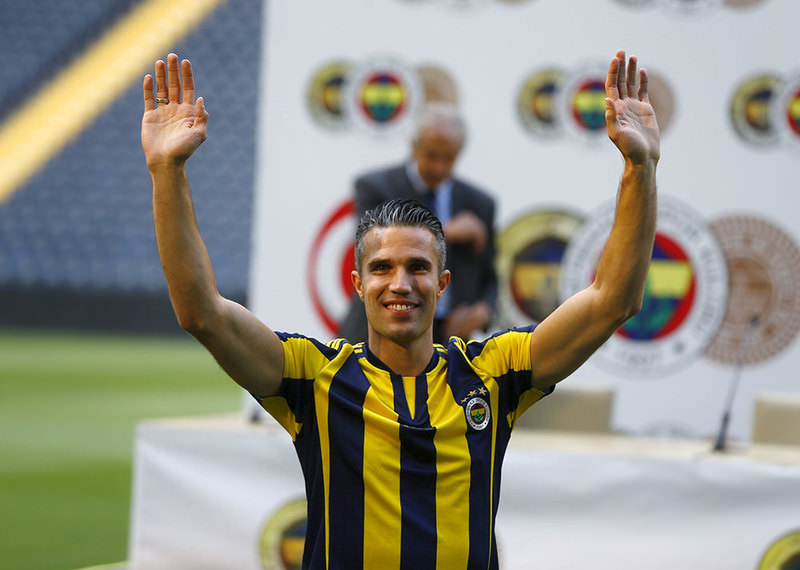 by Hakan Baş Aug 08, 2015 12:00 am
Star footballers who have just signed with Turkish teams, including Dutch forward Robin van Persie, Portuguese winger Luis Nani, German forwards Lukas Podolski and Mario Gomez, Ricardo Quaresma and Stephane Mbia, have boosted the value of the league, according to data released by the German-based football data information website Transfermarkt. This has led the total market value of the Spor Toto Super League to top 1 billion euros.

Fenerbahçe, which transferred footballers such as Van Persie and Nani, managed to assume the title of the most expensive team of the league, exceeding Galatasaray that held the title for a long time. The yellow and navy blue team, which increased its total market value to 158 million euros, became the most valuable team of the league, while the value of Galatasaray reaached 139 million euros.

Galatasaray's Uruguayan goalkeeper Fernando Muslera kept his title of the "most expensive player of the league, topping the list with his value of 17 million euros. Van Persie, Dutch attacking midfielder Wesley Sneijder and Nani followed Muslera with 15 million euros each.

Many football stars, such as Van Persie, Nani, Podolski, Gomez and Cameroonian forward Samuel Eto'o, will make their debut in the Turkish Super League this season. The new season will also be dedicated to one of the deceased chairs of Turkish Football Federation (TFF), Hasan Doğan. Doğan died of a heart attack during his term in 2008.

The previous season (2014-15) was dedicated to former Beşiktaş chairman and player Süleyman Seba who died on Aug. 13, 2014, at the age of 88. Having lost the league title to their archrivals Galatasaray last season, Fenerbahçe signed many players to have a better shot at the title this season.

In addition, they signed Bursaspor's Brazilian striker Fernandao, who was the top scorer of the last season in Turkey with 22 goals. Moreover, Slovakian winger Miroslav Stoch returned to the club after playing abroad on loan.

One of the integral parts of the team, Brazilian defensive midfielder Felipe Melo is rumored to be leaving Galatasaray this summer. The latest league champions Galatasaray directly qualify for the Europe's top-tier international tournament UEFA Champions League's group stage.Having completed the last season in third place in the league table, Beşiktaş signed several players this summer, such as Brazilian center-back Rhodolfo from Gremio, German right-back Andreas Beck from Hoffenheim and Gomez from Italian Serie A team Fiorentina. The Black Eagles' former star, Ricardo Quaresma, returned to his former club from Porto. This is Quaresma's second spell in Beşiktaş after signing with Beşiktaş in the summer of 2010. He played for Beşiktaş until January 2013 when he moved to the Emirati club Al-Ahli on free transfer. Beşiktaş fans' favorite, Senegalese target man Demba Ba, was sold to Chinese Super League club Shanghai Shenhua. Additionally, Beşiktaş hot prospect, 21-year-old Turkish towering center-back Atınç Nukan, was signed by German Bundesliga 2 team Red Bull Leipzig. Antalyaspor, a new entry into the top Turkish division, transferred former Chelsea forward Eto'o this summer. One of the top players in the 2000s, 34-year-old Eto'o has played for leading European clubs including Barcelona and Inter. After short spells at English club Everton and Italian side Sampdoria last year, he will try to thrill the fans in Turkey this season.

The top 10 most expensive footballers in the Spor Toto Super League: