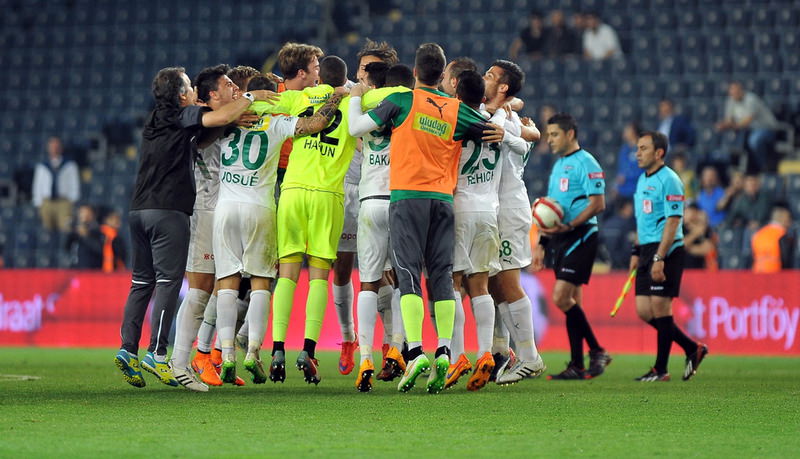 Many football stars such as Robin van Persie, Luis Nani, Lukas Podolski, Mario Gomez, and Samuel Eto'o will make their debut in the Spor Toto Super League this season, dedicated to one of the deceased chairs of the Turkish Football Federation, Hasan Doğan

Spor Toto Super League's 75-day break ended on Friday, with Fenerbahçe and Eskişehirspor going head to head in Istanbul for the opening game of what promises to be a star-studded season.

The new season will be dedicated to one of the deceased chairs of the Turkish Football Federation (TFF), Hasan Doğan. Doğan died of a heart attack during his term in 2008.

The previous season, which finished on May 30, 2015, with Galatasaray declared the champions, was dedicated to former Beşiktaş player and chairman Süleyman Seba, who died on Aug. 13, 2014, at the age of 88. Eighteen teams will be competing against each other over nine months, and 306 matches will be played. Many football stars such as Dutch forward Robin van Persie, Portuguese winger Nani, German forwards Lukas Podolski and Mario Gomez, and Cameroonian forward Samuel Eto'o will make their debut in the Turkish Super League this season.

Having lost the league title to their archrivals Galatasaray, Fenerbahçe feature a number of new signings who should give them a better shot at the domestic title this year.

They also signed Bursaspor's Brazilian striker Fernandao, who was the top scorer last season in Turkey with 22 goals.

This is Quaresma's second spell in Beşiktaş after signing with the Black Eagles in the summer of 2010. He played for Beşiktaş until January 2013, when he moved to Emirati club Al-Ahli on a free transfer.

Antalyaspor, a new entry into the top Turkish division, signed former Chelsea forward Samuel Eto'o this summer. One of the top players in the 2000s, 34-year-old will try to thrill the fans in Turkey this season.

Kayserispor, Osmanlıspor and Antalyaspor are newcomers to the Super League from the second division, while Balıkesirspor, Kayseri Erciyesspor and Kardemir Karabükspor suffered relegation. The first half will end on Dec. 27. The second half will begin on Jan. 17, 2016, and the season is scheduled to finish on May 22.

The first derby of the season will be played between Beşiktaş and Fenerbahçe in Beşiktaş's temporary ground the Atatürk Olympic Stadium on Matchday 6. On Matchday 9, Fenerbahce will host archrivals Galatasaray, while Beşiktaş will meet Galatasaray at home on Matchday 15. Spor Toto Super League teams can register 28 players each and they are able to sign a maximum of 14 foreign players, who can be picked in the starting 11 without limitations. In previous seasons, the teams could sign eight foreign players maximum, and only five of them could play in the match squad. Fenerbahçe are the most valuable team in the Super League, with an estimated value of $175.9 million. Galatasaray come in second with $152.6 million and Beşiktaş, whose squad value is $140.6 million, are in third place.

German-based football data information site, "Transfermarkt" says that Galatasaray goalkeeper Fernando Muslera is still "the most valuable player" in the league with a market value estimated at $18.9 million.

The second spot is shared by a number of stars, including Fenerbahçe's new signings, forward van Persie and winger Nani, and Galatasaray playmaker Sneijder. Each player's current market value is around $16.6 million. Fenerbahçe winger Moussa Sow comes in third with a $14.4 million market value.