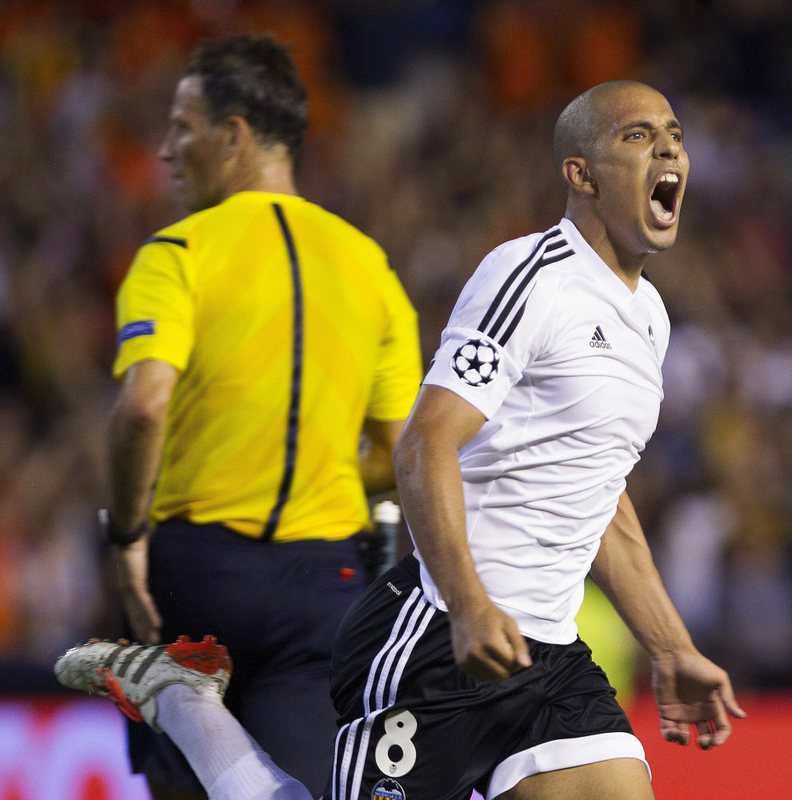 by Daily Sabah with AFP Aug 21, 2015 12:00 am
Valencia's hopes of a return to the lucrative Champions League group stages after a three-year hiatus look more assured after beating last season's quarter-finalists Monaco 3-1 in Spain, the impressive Algerian international Sofiane Feghouli creating one and scoring the crucial third goal. Turkish powerhouse Fenerbahçe have long wanted to sign Feghouli. Valencia took an early lead at home to Monaco as Rodrigo was on hand to tap home after Feghouli had stolen in ahead of a Monaco defender to set up the goal. Monaco - who had a goal in the first-half ruled out - levelled early in the second-half as Croatian midfielder Mario Pasalic, on loan from Chelsea, scored but 10 minutes later Daniel Parejo gave the hosts the lead once again converting substitute Pablo Piatti's cross.

Pasalic looked to have restored parity only for Australian goalkeeper Matthew Ryan - signed earlier in the close season purposefully because the club wanted a 'keeper equal to Champions League level football - to produce a stunning save to keep the hosts noses in front. Indeed they should have gone two clear but Feghouli's brilliant set up was not rewarded as Parejo missed the target - the impressive Algerian decided it was better to try it on his own when he next had a chance and he made no mistake to give Valencia a 3-1 lead. Valencia coach Nuno Espirito Santo, who had to field a side without influential defender Nicolas Otamendi who appears set for a move to Manchester City, was delighted they had come out on top. "It is a very important victory," he said. "Difficult, workmanlike but deserved. In the pre-season this is the tie we had based all our planning around and to win it is fundamental for us."

Elsewhere, Celtic may come to regret not making Jo Inge Berget's loan a permanent move as his double for Swedish side Malmo saw them only lose 3-2 away in their Champions League play-off first leg match and leave the Scottish champions hopes of a place in the group stage in the balance. Ukrainian giants Shakhtar Donetsk also look nicely-placed for the group stages - they have reached it on every occasion since the 2009/10 campaign - after coming away with a 1-0 win against Rapid Vienna, who were last in the group stages in 2005/06. Skenderbeu's chances of becoming the first Albanian side to make the group stages of a European club competition look slender after losing 2-1 at home to Dinamo Zagreb, the Croatian side coming from behind with Algerian El Arabi Hilal Soudani getting the equalizer and then in the dying second Josip Pivaric scored the winner.
RELATED TOPICS