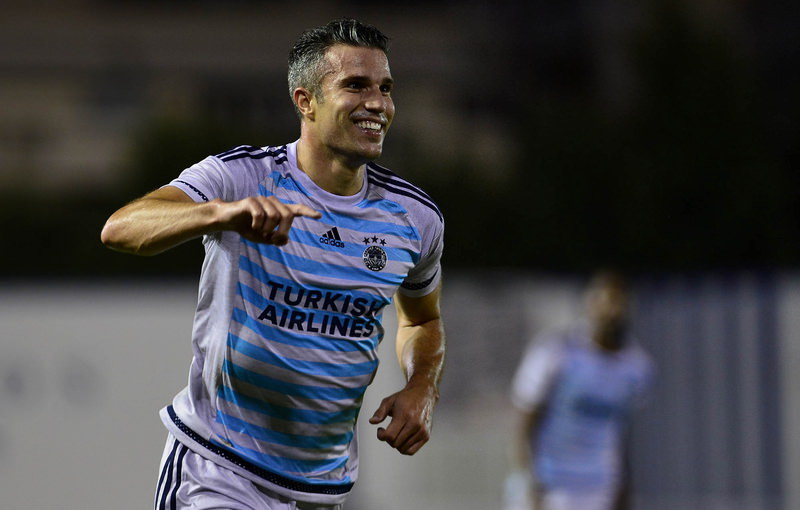 Fenerbahçe got the advantage they sought in the away match against Greek club Atromitos, which was founded by Greek immigrants from Edremit, a district in northwest Turkey's Balıkesir province. Contrasting its name, meaning "fearless," Atromitos preferred a very defensive system against Fenerbahçe in the UEFA Europa League play-offs' first leg at Peristeri Stadium in Athens on Thursday night. That's why Fenerbahçe could barely find the net in the last minute of regular time thanks to their Dutch star Robin van Persie, nicknamed "The Flying Dutchman."

Since joining the Turkish club from Manchester United for $5.2 million last month, the 32-year-old Dutch striker replaced Moussa Sow 10 minutes before the end of the match and netted a 90th-minute winner. The 1-0 victory leaves the 2013 semi-finalists primed to clinch a place in the group stage in the return leg next Thursday on Fenerbahçe's home ground, Şükrü Saraçoğlu Stadium in Istanbul.

Van Persie leaped over a rival footballer and found the net with a stunning header. This score gives Fenerbahçe a sizable advantage to qualify for the Europa League group stage.

Van Persie scored Fenerbahçe's 100th goal in away matches played in European tournaments and carved his name into the club's history. Fenerbahçe scored 100 goals and conceded 187 goals in away matches played in European tournaments. With his performance against Atromitos, van Persie has also attracted the attention of his native country. The Dutch national football team's coach, Danny Blind, said they have been looking closely at the Fener star. The Dutch national team will face Turkey in the 2016 UEFA European Football Championship qualifying tournament on Sept. 6. Blind said, "We will discuss whether van Persie will be called for the national team ahead of the match."

Meanwhile, the Greek club heavily criticized Italian referee Daniele Orsato and accused him and his assistants of favoring Fenerbahçe. Atromitos coach Michalis Grigoriou alleged that van Persie fouled before scoring his goal while leaping over a rival. "The referees performed very badly," Grigoriou said, adding: "Fenerbahçe played with 14 players, including the referee trio. Since the very first minute, the referees were unfair to us. We played well anyway against such a big team. We will work for the next match and face ... Fenerbahçe with a new tactic."

However, van Persie denied this accusation, saying: "I used my body cleverly and the referee made the right decision. The two sides played equally well. We were more lucky [sic]. The result is great, I think."

The return match will be refereed by Croatian official Ivan Bebek.

Banned for two matches by the UEFA, Fenerbahçe's Portuguese coach Vitor Pereira watched the game from his hotel suite instead of on the sideline.

His assistant coach, Filipe Almeida, said in a press conference after the match: "We could have scored more goals, but we did not manage. We leave here with a good result anyway. The ground was very bad in the field. We have many players who have very high technical abilities; that's why we had difficulties during the match, and our players could not use their whole capacity."

Elsewhere, Dortmund continued their perfect start to life under new coach Thomas Tuchel with a 4-3 win away against Norwegian side Odd, but they needed a remarkable recovery from three goals down to do it. Southampton have work to do if they are to join Tottenham Hotspur and Liverpool to make it three English clubs in the group stage after they were held to a 1-1 draw at home by Danish champions Midtjylland. Wedged in-between the second leg of their Spanish Super Cup triumph over Barcelona on Monday and a rematch with the Catalans at San Mames in their opening game of the La Liga season on Sunday, a trip to face MSK Zilina in Slovakia looked like a hazardous one for Athletic Bilbao, or so it proved for the beaten 2012 finalists who threw away a two-goal lead to lose 3-2. The individual performance of the evening came from Slovakian forward Robert Mak. The former Nuremberg player scored a hat trick and set up further goals for his teammates Dimitris Pelkas, Garry Rodrigues and his Greek side PAOK hammered Brondby 5-0.
Last Update: Aug 22, 2015 1:42 am
RELATED TOPICS