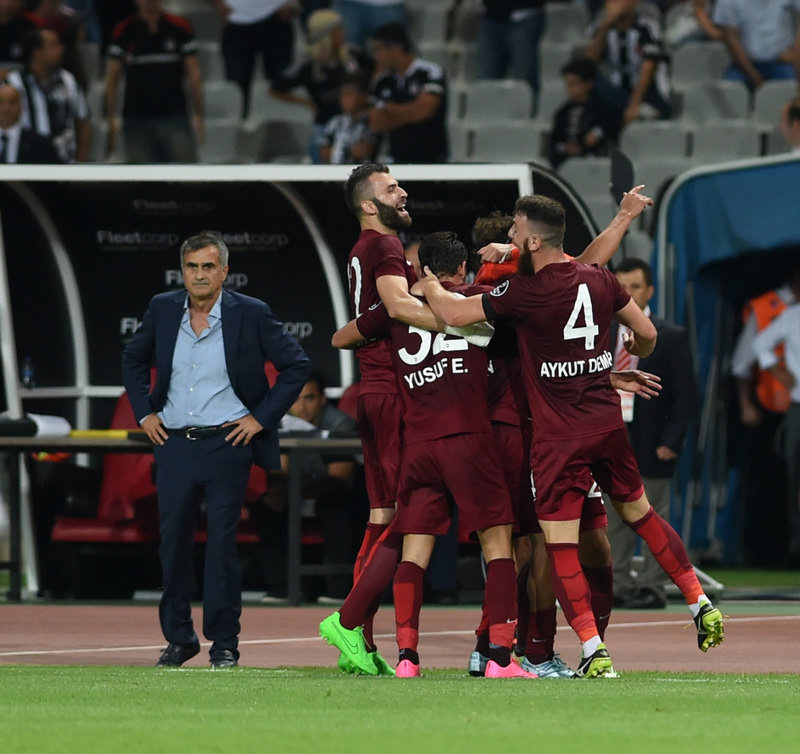 Having started as league leader thanks to a 5-2 win against Mersin, Beşiktaş was stunned by Trabzonspor 2-1 after their Portuguese star Quaresma left his team a man down after two yellow cards

A 2-1 defeat to rival Trabzonspor has broken Beşiktaş's premature celebrations. Beşiktaş entered the second week of the Super League on top of the table after they hammered Mersin İdmanyurdu last week. Having watched the team play such good football, everybody thought that Beşiktaş would easily cruise past Trabzonspor. However, the Istanbul club lost the first derby of the season against Trabzonspor 2-1 because of two yellow cards collected by new signing Ricardo Quaresma.

Beşiktaş started well in the Spor Toto Super league, crushing Mersin İdmanyurdu 5-2 and becoming the league leaders after a week. In the first derby of the new season, Beşiktaş took to the field with great self-confidence, perhaps over confidence.

Trabzonspor went ahead on Yusuf Erdoğan's goal in the 53rd minute. And Quaresma, who was shown a yellow card in the 40th minute due to a hard foul, scored a magnificent goal in the 57th minute. But his celebrations lasted only three minutes. Standing over a free kick, he touched the ball despite referee Ali Palabıyık warning him not to before he set the ball for the free kick shot. Since Quaresma ignored the warning and hit the ball, he was sent off with a second yellow card. Beşiktaş, who were one man down in the last 30 minutes, could not prevent Erkan Zengin's magnificent shot that secured the win.

Gökhan Töre's unbelievable miss late determined Beşiktaş's fate. With this win, Trabzonspor won their second straight match and sat on the throne as of late Saturday, as the players rejoiced in the locker room. The fans in Trabzon also took to the streets and celebrated the win.

After the match, Quaresma's actions were deemed irresponsible, and he was heavily criticized in the media as well as by fans and administrators. According to Turkish media commentators, he might be expelled from the club if he continues to be so irresponsible. An administrator who spoke anonymously to the media said: "We can't stand such behavior. A footballer who plays for Beşiktaş must be aware of his responsibilities and behave."

Meanwhile, Beşiktaş wasn't able to break the bad luck cycle they endured last season at Ataturk Olympic Stadium where they lost six out of their last seven matches. Due to the never-ending construction of their own stadium, Vodafone Arena, formerly known as İnönü Stadium in the Beşiktaş, Istanbul, they have to play in Ataturk Olympic Stadium. The Olympic Stadium has never been welcomed by football teams because of its distance from the pitch and a non-acoustic structure that is a very important for Beşiktaş fans, who set the world decibel record.

Beşiktaş coach Şenol Güneş said in the press conference after the match: "I don't think we deserved to lose until the 80th minute of the match. We can compensate for this loss, but it's a shame to lose three points. The decisions of the referee are disputable. A referee must not stop a team that favors attack football. It would be a football massacre. We started well. We sought positions all the time. Our rivals prioritized defense. But in the second half, they played attacking football. Although we were one man down in the last 30 minutes, our players sought goals. In particular, Gökhan Töre could have changed the result if he had not missed an unbelievable opportunity.

"We can fix our deficiencies but can't fix the referee. I can't say anything about the card shown to Quaresma. To me, the first yellow card was right, but the second one was his judgment. He stopped us in an advantageous position instead of employing the advantage rule. That man (Referee Ali Palabıyık) did the worse things to us last year. We can overcome the stadium problem. It is not an excuse for us. Now, this is our stadium."

Trabzonspor's Yusuf Erdoğan said, "We want to get the title this year. This win must be exaggerated because we are a big team in any case."
RELATED TOPICS