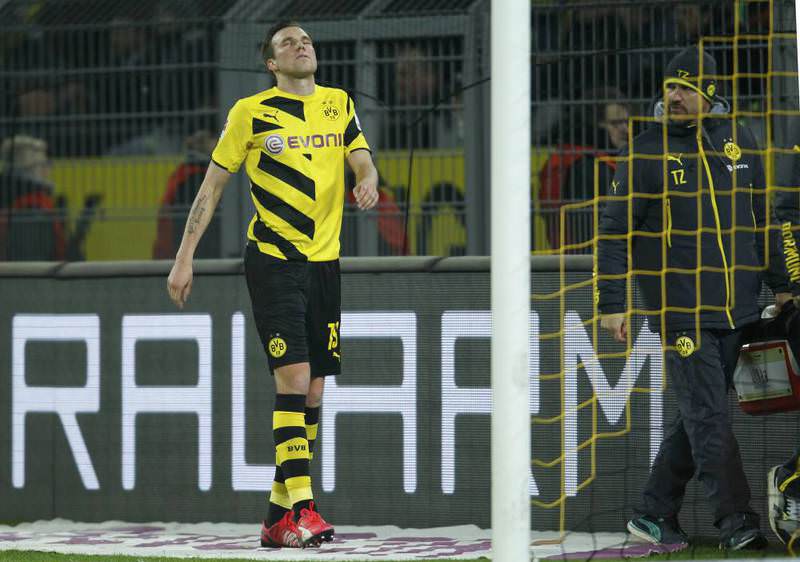 Grosskreutz will move to Istanbul and train with Galatasaray but due to the club failing to send the required documents before the transfer deadline, the German will not pull on a Galatasaray shirt until next year

Galatasaray are not happy about FIFA's decision to not approve the signing of Kevin Grosskreutz from Borussia Dortmund due to the paperwork being sent after the deadline, which closed on Tuesday. Grosskreutz is now unable to play for the next six months, Local media described the situation as the "Scandal of the century." The German footballer came to Turkey on Monday, the last day of the summer transfer season. He went for a medical check and signed the contract at 11 pm at the Turkish Football Federation building in Levent, Istanbul. However, Grosskreutz's agent submitted extra demands from Galatasaray. He wanted a share from the next possible sale of Grosskreutz. This was refused by the Galatasaray administration. After hard negotiations, the German football player signed for Galatasaray.

Then, Galatasaray sent the papers to the Turkish Football Federation, as did Borussia Dortmund to the German Football Federation, sending the documents on time. But Galatasaray's Vice Football Director Uğur Yıldız is believed to have made a mistake while submitting the papers online to the Transfer Pairing System, with one of the papers lacking the required signature on it. The Galatasaray administration did not notice this mistake so the correct paperwork for the 27-year-old's transfer was not filed before the transfer window closed on Monday, football's governing body FIFA have refused the move for a reported 1.5 million euros ($1.6 million).

Galatasaray's appeal against FIFA's decision was turned down on Wednesday and Dortmund have nevertheless agreed to release the midfielder from his contract, which was valid until 2018. Grosskreutz can now only officially sign for Galatasaray when the next transfer window opens on January 1 and until then he can only play in friendly matches and train with the Turkish giants, which both teams have confirmed. Despite his ineligibility, Grosskreutz says he will move to Istanbul next week to get used to his new club after six years and 176 league appearances for Dortmund.

A member of the team which lost the 2013 Champions League final to Bayern Munich, Grosskreutz was a passionate Borussia fan before he played for the team in 2009 and has a tattoo of the Dortmund skyline on his right calf. He thanked the Borussia fans for "six wonderful years" of support and explained that he had to leave Dortmund due to a lack of game time under new coach Thomas Tuchel.

"Everyone knows that I am a footballer through and through and I need to play in matches, and receive trust, like I need the air to breath," he wrote on his Instagram account.

"FIFA has NOT recognised my eligibility, but nevertheless next week I will embark for Istanbul and get used to it. I'll only have the chance to prove myself in training."

Grosskreutz will link up with fellow 2014 World Cup-winner Lukas Podolski at Galatasaray and he is the second member of Dortmund's 2013 Champions League side to leave the club before the transfer window closed.

Meanwhile Galatasaray has decided to file an appeal in the International Court of Arbitration for Sport. Uğur Yıldız resigned from his post after the incident. The case resembles the failed transfer of Manchester United goalkeeper David de Gea to Real Madrid, which fell through because the paperwork was not submitted on time. Grosskreutz is expected to be used as a wing-back should he complete his move to the Turkish Super League champions - who have also signed his international team-mate and former Arsenal striker Lukas Podolski.
RELATED TOPICS