Turkey rises from its ashes, crushing the Dutch 3-0 in the Euro 2016 Qualifiers 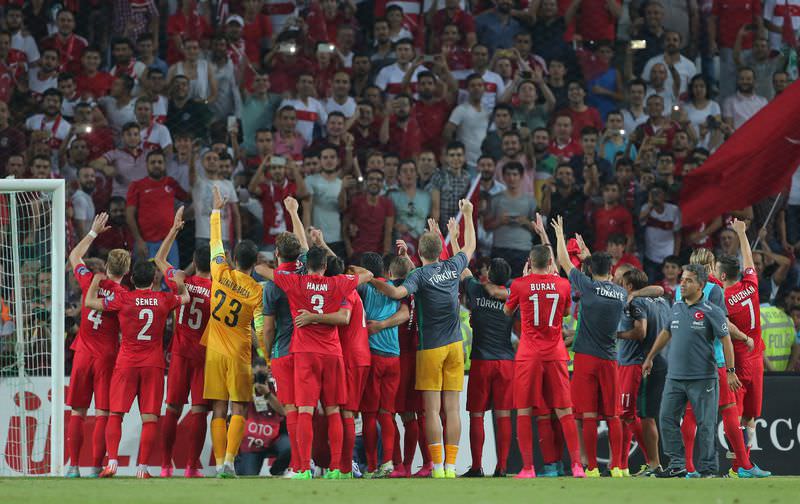 Turkey's national football team defeats the Netherlands 3-0 in the Euro 2016 qualifying match at Konya's Arena on September 6, 2015. (AFP Photo)
by Compiled from Wire Services Sep 06, 2015 12:00 am
Turkey's 2016 European Championship dreams were saved thanks to three life-changing goals and a resounding victory against the Netherlands in Sunday's match held in central Turkey's Konya province.

Turkish midfielder Oguzhan Ozyakup scored the first goal in the eighth minute. Midfielder Arda Turan doubled the score in the 26th minute. Burak Yilmaz completed the Dutch humiliation by scoring a late third for the hosts, firing through the legs of defender Jairo Riedewald in the 86th minute.

The Netherlands' chances of qualifying for the 2016 European Championship slipped further away as the team that finished third at last year's World Cup crashed to a 3-0 defeat by Turks.

Turkey are now in third place in Group A, a spot that guarantees a participation in a two-legged playoff against a third-place team from another group, of which the winner moves to the Euro 2016, to take place in France next summer.

The Netherlands trails Turkey by two points, with two games left to play.

"This whole qualification campaign has been incredibly difficult," Van Persie said. "We still have a chance, but it is no longer in our hands and that is terrible."Turkish Prime Minister Ahmet Davutoglu was in attendance to watch the match held in Torku Arena.

The tournament in France looks a long way off for the Netherlands, European champion in 1988.