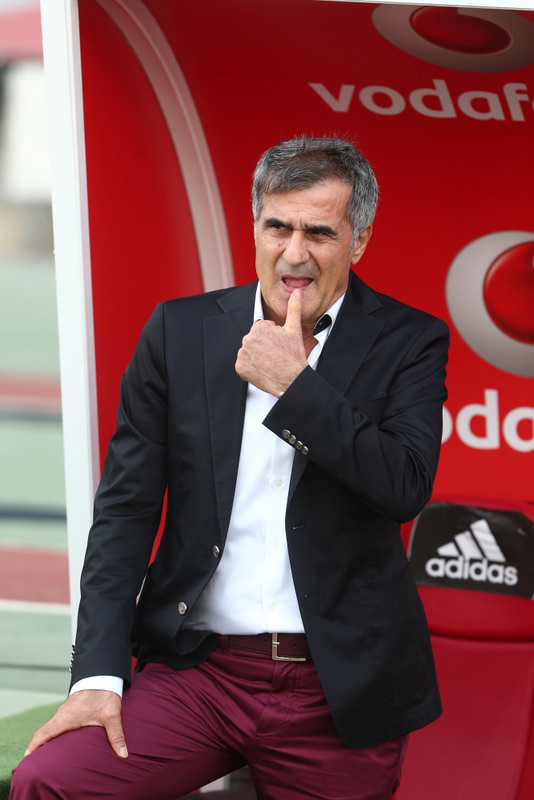 by Arda Alan Işık Sep 15, 2015 12:00 am
Unlike many other columnists, Beşiktaş's swift victory against Başakşehirspor did not convince me. Despite the "extra" performances by Mario Gomez, Atiba Hutchinson and Gökhan Töre, coach Şenol Güneş (above) could not gain the upper hand against Abdullah Avcı. Beşiktaş's functional four-sided midfield, which allowed the team to get into the opponent's half with more men, was not present in this game. For sure, the same players were on the field, but the responsibility was on Oğuzhan Özyakup's shoulders. Thus, the team was miles away from what Şenol Güneş and Beşiktaş had aimed for in the past weeks. This being given, Şenol Güneş should always keep in mind that good results do not necessarily guarantee good performances in the long-term, but the other way around is always possible.

However, the point is, Turkish coaches and columnists' slavery to the scoreline is always dangerous for reformist figures and Beşiktaş is not resilient to such danger. This obsession makes coaches rely on talented players to avoid responsibility. Mario Gomez and Gökhan Töre might save another day, but the real power comes if Şenol Güneş takes charge; as Ali Fikri Işık from hurhaber.com explained:

"If players are going to decide how they are going to cooperate throughout the 90 minutes, then why do we need coaches? What determines the core of the game is not where you position your players but how you organize the cooperation among them in both offense and defense. Otherwise, if every player finds himself with an unlimited number of possibilities, and if those possibilities are up to his talent, not his coach's superior mind, then it will be impossible to predict and control the game."

Basically, what Ali Fikri Işık said is that, if you position 11 independent players on the field and expect them to cooperate without any specific plan, you get chaos. Against Başakşehir, what Şenol Güneş did was unfortunately this. Güneş let his players use a lot of direct passes and penetrations in order to pierce the strictly organized Başakşehir midfield and defense. Specifically, Oğuzhan Özyakup was responsible for organizing attacks and Gökhan Töre had to create the opportunities. Luckily, Mario Gomez was having a good day and finished Beşiktaş attacks perfectly.

Nevertheless, this game does not offer anything sustainable or reliable for Beşiktaş. What makes Şenol Güneş different from almost all Turkish coaches is that he never lets chaos do his job and always provides a trustworthy and comfortable strategy for his players. Beşiktaş could win more games with this strategy, but as the Slaven Bilic experience shows us, Fenerbahçe and Galatasaray are more experienced when it comes to chaos. Therefore, Beşiktaş's only way to gain an advantage is to obtain the philosophy that Şenol Güneş initially had this season. Both Turkish football and Beşiktaş crave this revolution, better not to miss it for trivial pursuits.

Just like the mistake he made against Latvia while playing for the national team, Başakşehir goalie Volkan Babacan again did not throw himself completely at the ball for Mario Gomez's goal. Someone should remind Babacan that goalkeeping is a tough business. On the other hand, Beşiktaş goalkeeper Tolga Zengin played almost flawlessly and his save from Mehmet Batdal's shot in the final minutes was amazing. That is how a goalkeeper should watch his positioning and throw himself at the ball.
RELATED TOPICS