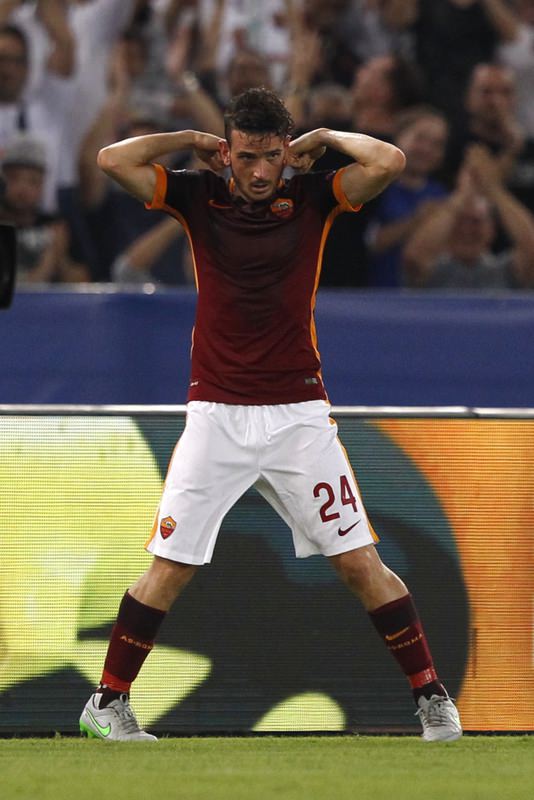 by French Press Agency - AFP
Sep 18, 2015 12:00 am
Barcelona defender Gerard Pique led the tributes to the "crazy" goal scored by Alessandro Florenzi (above) that earned Roma a point from the sides' 1-1 Champions League draw on Wednesday.

"It was crazy!" Pique wrote on Twitter in a reply to a fan who had asked the Spanish defender's reaction to Florenzi's long-distance strike that caught Barcelona 'keeper Marc-Andre ter Stegen off guard.

"When I saw the goal, I didn't believe it! One of the best goals I've received in my career."

On what was Lionel Messi's 100th Champions League appearance, the Argentinian had been hoping to close the gap on rival Cristiano Ronaldo's new record tally for goals in the competition.

Both had been tied on 77 but a hat-trick by the Real Madrid striker in a 4-0 win over Shakhtar Donetsk on Tuesday saw him pull three goals clear of Messi.

Messi was a class act throughout an entertaining Group E encounter at the Stadio Olimpico, where Roma were forced to defend for most of the night and take their chances on the counter-attack.

But the Barcelona star was upstaged by Florenzi's strike, which sports daily La Gazzetta dello Sport calculated at a distance of 55.49 metres.

After collecting the ball in his own half, Florenzi carried it over the halfway line near the right touchline, looked up and, when he saw the Barcelona 'keeper 15 metres out of his goal, launched a drive that went over Ter Stegen and in off his far post.

The 24-year-old Florenzi admitted to stunning himself.

"It was a great goal, you could see that by the reaction on my face after it went in," he said, admitting he decided to take a pot shot after realising he had no other choices.

"I saw (Edin) Dzeko but couldn't get the ball to him. So I said to myself, 'shoot'. The worst thing that can happen is it goes out of play. Then I saw it go in the back of the net."