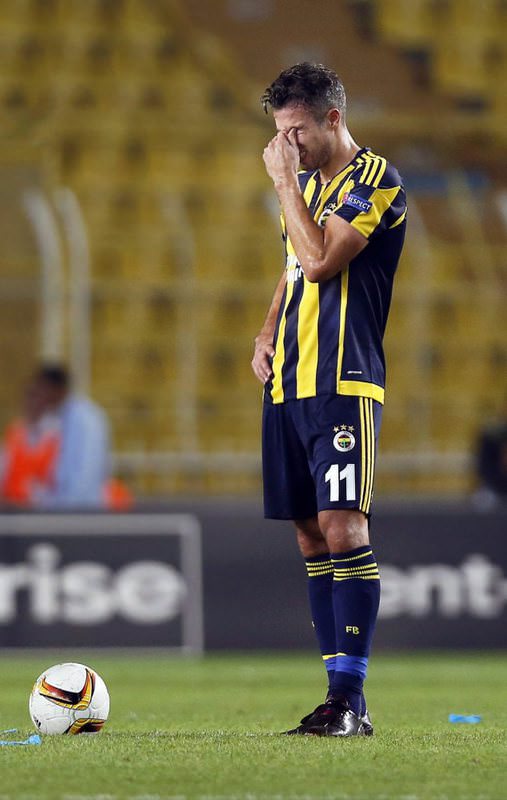 After Norwegian Molde won a stunning 3-1 victory over Fenerbahçe in Istanbul, Dutch star Van Persie who was initially welcomed by Fenerbahçe fans was booed for the first time after his poor performance

Fenerbahçe turned heads when they made transfers featuring well-known names, such as Robin van Persie and Luis Nani. However, van Persie, who is the most expensive footballer ever in Turkish league history, did not satisfy fans' expectations in this last performance. After Fenerbahçe fell to Norwegian side Molde 1-3 in the 2015-16 UEFA Europa League at home on Thursday night, Van Persie was booed and whistled at for the first time after he was replaced by Uygar Zeybek in the 69th minute.

Van Persie has played the full 90 minutes only once in eight matches. The other star, Nani, made a shocking explanation from his social media account, saying, "Someone must pay the price for this bad result; yet we did not lose everything. We must continue to focus on our goals."

Fenerbahçe's coach Vitor Pereira was the second target of frustrated Fener fans. He was criticized for his tactical failures. He defended himself and said, "We lost control after we conceded the second goal. I take responsibility for this defeat. The worry and panic are our biggest enemies especially when you fall behind your rivals. All the coaches even the most famous ones like Mourinho, Ancelotti and Guardiola can lose matches."

Molde coach Erling Moe said, "Fenerbahçe is a good team. But we played collectively as a team and got a good result. Our defense was strong. Fenerbahçe is still one of the most favorite teams to advance to the next stage."

Tommy Hoiland scored the first goal of Molde and mocked Fenerbahçe, saying, "If this is hell I wonder what the heaven is."

As for the game, Molde's attackers shocked Turkey's all-star team during Thursday night's Group A opening match at Şükrü Saraçoğlu Ülker Stadium in Istanbul. After Norwegian team's captain Daniel Hestad was fouled in the box, center-forward Tommy Hoiland kicked a penalty into Fenerbahçe's goal in the 36th minute. Fenerbahçe right-winger Nani's equalizer, and the only goal for his team, came six minutes after the penalty. But, Molde left-winger Mohamed Elyounoussi and right-back Martin Linnes scored the goals that brought the shock victory in the 53th and 65th minutes, respectively. Elyounoussi was sent off at the 84th minute of the match. In the other group match, Dutch club Ajax drew against Scotland's ten-men Celtic 2-2 in Thursday night's home game.

The other Turkish football club, Beşiktaş, defeated Albanian club Skenderbeu in an away game in their first 2015-16 UEFA Europa League Group H qualifier.

The Albanian champions were upset by the Istanbul giants in Thursday night's group opening match at Elbasan Arena in the Albanian city of Elbasan. Beşiktaş attacking midfielder Jose Sosa struck the winning goal for the Black Eagles in the 28th minute. In the other Group H game on Thursday, Portugal's Sporting Lisbon was beaten 3-1 by Lokomotiv Moscow at a home game in Lisbon.

Borussia Dortmund's Park Joo-ho scored three minutes into stoppage time on his debut to secure a 2-1 win over FK Krasnodar while Ajax Amsterdam also left it late to snatch a 2-2 home draw with Celtic in a battle between two former European champions.

Five times continental champions Liverpool's stuttering start to the season continued as they were pegged back to draw 1-1 at French side Bordeaux.

There were also wins for Tottenham Hotspur, who beat Azerbaijan champions Qarabag 3-1, and Basel, who downed Fiorentina 2-1 away, as 48 teams in 12 groups began their bids for Europa League success amid a flurry of goals.
RELATED TOPICS