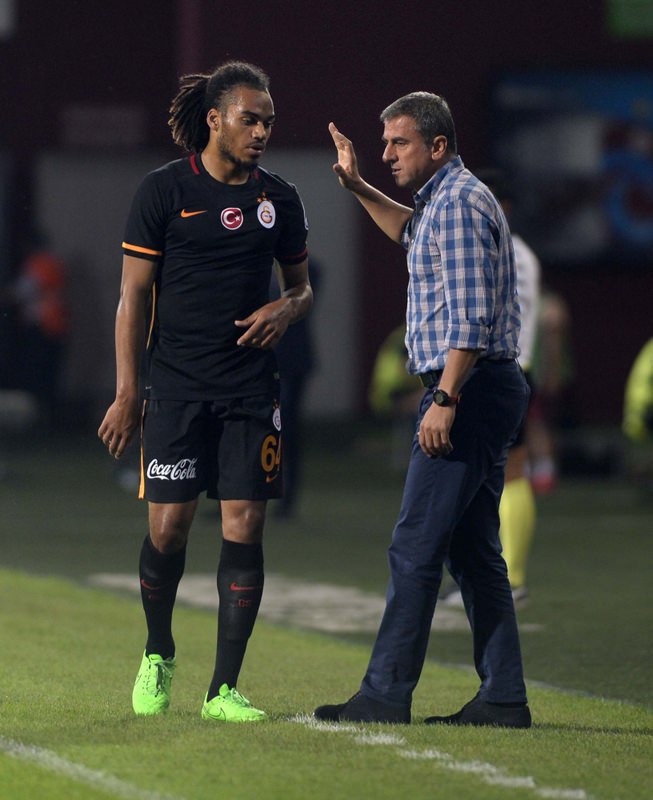 Hamza Hamzou011flu was full of emotions due to the harsh criticism directed at him in recent weeks.
by Hakan Baş Sep 21, 2015 12:00 am

Having been criticized heavily after losses in both local and international matches, the Galatasaray coach reacted ironically after his team barely won 1-0 in the critical game against Trabzonspor

The match between Galatasaray and Trabzonspor was the most nerve-wracking match in Turkey's Spor Toto Super League. Previous league champion Galatasaray started very poorly and collected only five points in four weeks. They also got stunned by Atletico Madrid 2-0 in their own home on Wednesday. On the other hand, Trabzonspor got 10 points in the first four weeks and ranks second in the league. Everybody was wondering whether Galatasaray could rise from the ashes or if they would suffer a new blow from powerful Trabzonspor, which had the advantage of playing on its own turf. Besides, Trabzonspor started the match off very well and created very dangerous attacks against Galatasaray, such as when Trabzonspor's Erkan Zengin missed an incredible goal in the six-yard box. He could not score on an empty net in the 54th minute. The other breaking point for Trabzonspor was the controversial penalty call on Galatasaray's Jason Denayer, who touched the ball in the penalty area. The referee Cüneyt Çakır ultimately did not award the penalty.

After this second miracle, Galatasaray found the net with the help of luck after their own goal by Trabzonspor M'bia in the 82nd minute. Trabzonspor lost for the first time this season and stayed ranked second with 10 points, while Galatasaray raised their points to eight.

In a press conference after the match, Galatasaray coach Hamza Hamzoğlu was full of emotions due to the harsh criticism directed at him in recent weeks. He erupted and gushed with emotion saying: "Yes. I'm still a bad coach, and we won by chance tonight. I know everyone will be happy if I quit, but I won't go anywhere. It was a very difficult match. The players played on an awfully bad pitch. My footballers played as they had to, and God also helped us. We lost matches before, but those were because of me."

On being reminded that although they had won three cups the last season there was talk about his resignation, Hamzaoğlu said: "We did our best in the previous matches. But we could not win. I never escape and won't go anywhere. I will fight until the end. This team won three cups with me, and I'm still a bad coach!"

Galatasaray's Bilal Kısa said, "We are going through a tough period, and we needed a win."

However, Trabzonspor's coach Şota Arveladze was full of anger after the match, mostly due to the decisions of Çakır, saying: "It was a good game. We lost it after the goal. But I must say that the referee directed the game in the way that he wanted. He did not award the penalty that we deserved to be awarded. I'm not content with the referee."

Elsewhere, Çaykur Rizespor trashed one of the flashiest teams in the league, Antalyaspor, 5-0 in Rize. Deniz Kadah got a hat trick while Antalyaspor's world famous star Samuel Eto'o stayed below average. Medicana Sivasspor, which is trying to climb out of the bottom of the league, tied Torku Konyaspor.
RELATED TOPICS