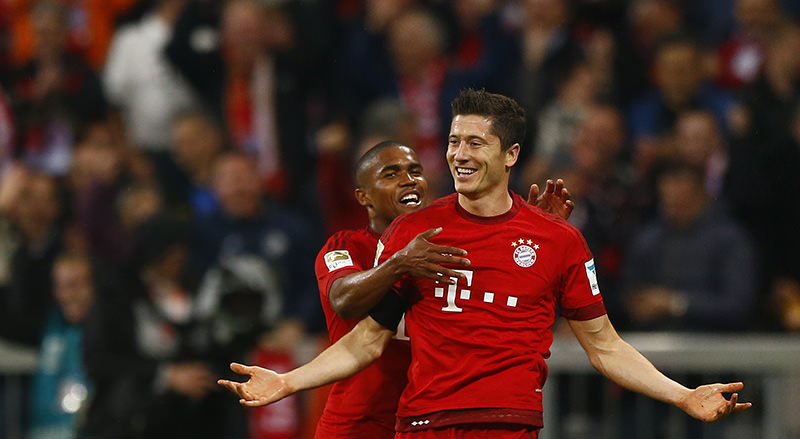 Bayern's Robert Lewandowski, right, celebrates with teammate Douglas Costa after scoring during the German Bundesliga soccer match between FC Bayern Munich and VfL Wolfsburg (AP Photo)
by Associated Press Sep 23, 2015 12:00 am
Substitute Robert Lewandowski made Bundesliga history on Tuesday after scoring five goals in the space of nine minutes as Bayern Munich came from behind to rout Wolfsburg 5-1 and move top of the standings.

His feelings of amazement were shared by Bayern coach Pep Guardiola.

Daniel Caligiuri fired the visitors ahead in the 27th, controlling Julian Draxler's cross with his first touch and then blasting the ball into the corner of the net with his next.

Bayern goalkeeper Manuel Neuer almost paid the price for a midfield foray in the 39th, when he lost the ball to Caligiuri and Josuha Guilavogui tried his luck from distance. The stranded keeper was relieved to see Guilavogui's punt saved by the left post.

Bayern was 1-0 down at the break for the third time in six games this season.

But then Lewandowski came on for the second half and changed everything. He equalized in the 51st, put Bayern ahead a minute later, and completed his hat trick when he hit the post, then the goalkeeper and kept going till he scored. Three goals in three minutes, 22 seconds.

It was the Bundesliga's fastest hat trick ever, bettering Michael Toennies' five-minute feat against Karlsruher SC goalkeeper Oliver Kahn on Aug. 27, 1991 for Duisburg.

"I had this record for 24 years," Toennies, now a Duisburg official, was quoted as saying on the club's Facebook page. "Of course it's a bit of a pity it's gone now. But what Robert Lewandowski conjured was simply sensational. You deserve it Robert! Congratulations!"

The Poland striker scored again in the 57th and claimed another goal three minutes after that, when he met Mario Goetze's cross with a scissor kick into the top corner.

He might have claimed a sixth - only for Ricardo Rodriguez to block his effort on the line in the 69th.

"When we all look at each other and see how stunned we are, there's no need for words," Wolfsburg substitute Maximilian Arnold said.

Lewandowski is the first substitute in the history of the Bundesliga to score five goals in one game and they were the quickest scored by anybody.

"I had a little knock last week but I'm OK now," Lewandowski said. "It was a great evening for me. But it was the sixth game. There are many more to come. I know it won't be so easy."

Dieter Mueller's record of six goals in a single game, for Cologne against Werder Bremen on Aug. 17, 1977, still stands.

Bayern moved three points ahead of Borussia Dortmund with its sixth win from six games. Dortmund can reclaim the lead if it wins by three goals or more at Hoffenheim on Wednesday.

Elsewhere, Michael Gregoritsch scored in the 87th for Hamburger SV to win 1-0 at promoted Ingolstadt, Vedad Ibisevic scored twice for Hertha Berlin to beat Cologne 2-0 and Sandro Wagner scored twice against his former side as promoted Darmstadt defeated Werder Bremen 2-1.

At Berlin's Olympiastadion, Ibisevic claimed his first Bundesliga goal since January 2014 when he scored with a glancing header inside the far post in the 43rd. The Bosnia striker scored his second in injury time to lift Hertha provisionally to fifth place.

In Darmstadt, Aron Johannsson put Bremen ahead in the 19th, only for Wagner to equalize with a penalty in the 31st and seal the win with a header in the 84th. Fin Bartels was sent off for Bremen with a second yellow card minutes later.

It was Darmstadt's second win on the club's return to the Bundesliga after 33 years. Only Bayern has beaten the promoted side so far.
Last Update: Sep 23, 2015 7:53 pm
RELATED TOPICS