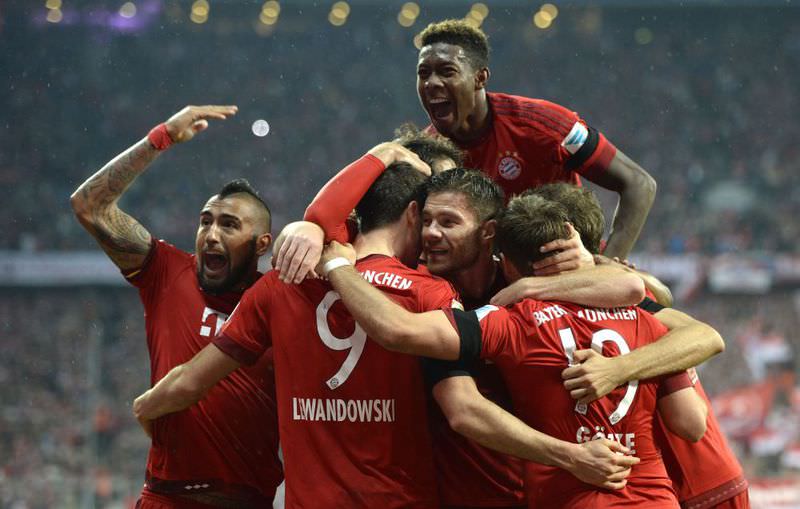 Bayern's Arturo Vidal (L-R), Mario Goetze, Philipp Lahm and Thomas Mueller celebrate the fifth goal of Robert Lewandowski during the German Bundesliga match between Bayern Munich and VfL Wolfsburg at the Allianz Arena in Munich.
by Daily Sabah with AFP Sep 24, 2015 12:00 am

Scandal-hit Volkswagen took a second blow this week, this time on the football field. Their Bundesliga team Wolfsburg was stunned by Bayern Munich 5-1 with Lewandowski scoring five goals in eight minutes, 59 seconds. It was the first time a player has come off the bench to score five goals in a Bundesliga game

One of the world's top carmakers, Volkswagen, which is engulfed by a growing crisis over its attempt to make millions of diesel cars appear cleaner than they are, has taken a hit in the football arena. Bundesliga team Wolfsburg, whose owner is Volkswagen, was stunned by a historic five-goal haul by rivals Bayern Munich's striker Robert Lewandowski. The 27-year-old scored all five goals in an official time of eight minutes, 59 seconds after coming off the bench at halftime with Bayern 1-0 down at Allianz Arena.

Lewandowski admitted he had little idea how fast his goals flew in after scoring five times in nine minutes to write Bundesliga history in Bayern Munich's 5-1 rout of Wolfsburg.

A superb strike by Wolfsburg's Daniel Caligiuri had given the visitors a shock lead until the 27-year-old Lewandowski sent Bundesliga records tumbling, including needing just three minutes, 19 seconds to claim his hat-trick. But he admitted it was a bit of a blur. "I have no idea how quick my hat-trick was, maybe five minutes?" he told German Sky on the sidelines before being told the official time. "Okay, it was a bit quicker than that."

It was his best haul since scoring all four for ex-club Borussia Dortmund in their 4-1 win over Real Madrid in the 2013 Champions League semi-final.

"To score four goals in a Champions League semi-final was very important and a big story in my career, but to score five goals means this is another big evening for me," said Lewandowski, who sent Bayern to the top of the Bundesliga.

Bayern coach Pep Guardiola held his head in disbelief on the sidelines as Lewandowski scored his superb fifth with a turn-and-volley on 60 minutes that gave Wolfsburg goalkeeper Diego Benaglio no chance.

"I've never experienced anything like that in my life! Five goals in nine minutes! Wow!" said Guardiola.

"I may never see anything like that again, either."

Lewandowski said his goal had simply been to score when he came on.

"I just wanted to shoot and shoot again. At 1-0 down, I had to score at least two goals," he added. "It's been an incredible evening. What a great feeling." His haul was the first time a player has come off the bench to score five goals in a Bundesliga game.

It was the first time five goals have been scored in a single German league match since Michael Toennies in August 1991 in a 6-2 win for Duisburg against Karlsruhe.

"The fact my old record is gone is, of course, a bit of a shame, but what Robert conjured up was simply sensational. Congratulations, Robert," wrote Toennies on Duisburg's Facebook page.

Lewandowski's stats for the game were five goals, nine shots from 30 touches, and his incredible tally could have been more as he missed two clear chances.

"He could have gone home with seven," admitted Bayern captain Philipp Lahm.

"You have to be critical there and point out the two opportunities that went begging right under his nose," he added with a grin.

Wolfsburg coach Dieter Hecking took the defeat with good grace. "What can you say? A world-class striker shot five times on goal and could have scored seven times," he said.

There was only one record that went begging.

Lewandowski fell just short of matching the record goal-haul for a single Bundesliga match of six achieved by Cologne's Dieter Mueller in their 7-2 win over Werder Bremen in August 1977.

It was little surprise that Lewandowski was named man-of-the-match, and he proved the ankle injury that kept him out of Saturday's 3-0 win at Darmstadt was not an issue.

"I think the ankle's fine," he grinned.
RELATED TOPICS