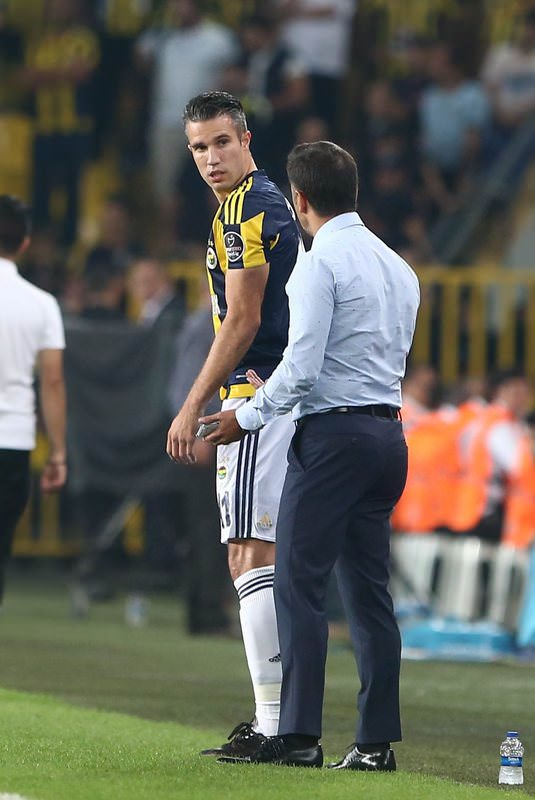 by Hakan Baş Sep 24, 2015 12:00 am
The crisis between Fenerbahçe's Dutch star Robin van Persie and Portuguese coach Vitor Pereira has been reportedly solved for the time being after the intervention of Director of Football Giuliano Terraneo. The Italian director met with van Persie and Pereira at the team's training ground and resolved the issue. According to sources close to the club, Pereira said to his rebellious player, "I'm very content with your performance and aware of your quality. But everybody must respect my decisions on the squad."

Confirming that his reaction to being benched was unfair, van Persie responded to the coach saying, "That was not right what I did in front of the spectators and TV viewers and I'm sorry for that."

After the embarrassing defeat against Norwegian side Molde in the UEFA Europa League group match last Thursday, the Fenerbahçe coach started the match with a team that included four players. Due to their poor performances, Fabiano Ribeiro, Robin van Persie, Volkan Şen and Caner Erkin were benched.

After the match van Persie said, "To be honest, I'm not happy to warm the bench. I can comfortably play the whole 90 minutes. I'm physically very well. I can respond to being benched by scoring and bringing my team victory. So that's what I did."

But Pereira did not hang around to respond to his rebellious star, saying, "If I could bring 23, 24, 25 players onto the field at once, things would be much easier. But football is played with 11 players each. And it is my duty to make the best decisions I can make on this squad. We make the decisions whether the players like it or not. I was very content with van Persie's performance after he took to the field. Not only for his goal but also the help he provided to his team-mates. He was of help both in defense and up front. No players want to warm the bench. It is very natural to be unhappy about being benched."
RELATED TOPICS