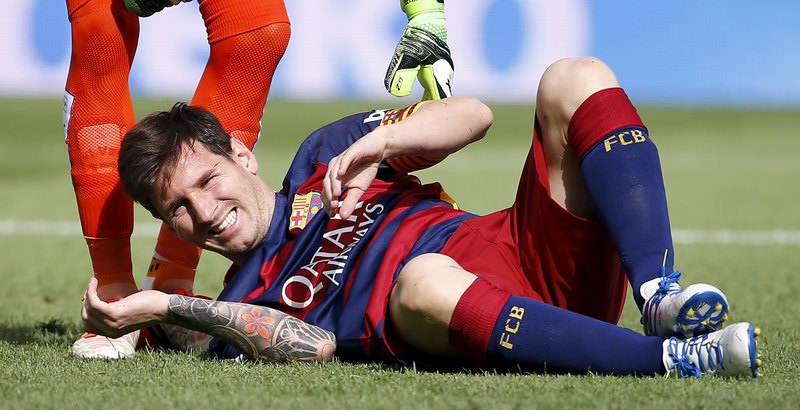 by French Press Agency - AFP Sep 26, 2015 12:00 am
Lionel Messi will be out for up to eight weeks with knee ligament damage suffered as Barcelona returned to the top of La Liga table with a 2-1 win over Las Palmas on Saturday.

Barca's troubles were eased, though, as Real Madrid remain a point behind the Catalans after being held 0-0 at home by 10-man Malaga.

Luis Suarez struck twice to ensure no more damage was done to Barca's title chances, but the hosts were left hanging on after Jonathan Viera's deflected effort three minutes from time halved the deficit.

"Firstly, it is always sad when a player gets injured. It is without doubt the worst thing in football for the players," said Barca boss Luis Enrique.

"Obviously, when it is Leo Messi even more so for the weight he carries amongst our group.

"It is logical in football that players will get injured and we have to know how to overcome it. I am sure we will perform at a good level."

Barca had been humiliated 4-1 at Celta Vigo in midweek and hopes of a trouble-free afternoon were ended after just 10 minutes when Messi injured his left knee in a clash with Pedro Bigas.

Messi, 28, was injured as he tried to turn the ball home after taking a wonderful first touch inside the area.

The four-time World Player of the Year briefly returned to the field after receiving treatment, but was clearly unable to run freely before he was replaced by Munir El Haddadi.

"Tests have confirmed that Leo Messi suffered a torn internal collateral knee ligament. The estimated time out will be seven to eight weeks," Barcelona said in a statement.

Suarez opened the scoring on 25 minutes as he rose to head home Sergi Roberto's inch-perfect cross from the right to settle Barca's nerves.

Barca made sure of a return to winning ways thanks to a wonderful team move seven minutes after the break as Neymar picked out Munir and his cross was left by Sergio Busquets for Suarez to fire into the top corner.

Suarez was involved once more as his trickery forced former Everton defender Antolin Alcaraz into handling inside the area.
The Uruguayan unselfishly gave up the chance of netting a hat-trick to allow Neymar to take responsibility from the spot, but he blasted over.

Barca were then forced to see out a nervous last few minutes as Las Palmas took advantage of an error from Javier Mascherano to pull a goal back as Viera's shot deflected in off Gerard Pique.
At the Bernabeu, Madrid failed to move back to the top of the table as they were denied by an inspired display from Malaga goalkeeper Carlos Kameni.

Cristiano Ronaldo had an early goal ruled out for offside before Kameni got down well to twice turn efforts from Jese Rodriguez behind.

Madrid launched wave upon wave of attack towards the Malaga goal, but were repelled by Kameni as he made an incredible save to deny a fiercely struck volley from Ronaldo as his wait to become the club's all-time leading scorer continued.

Malaga also had their chances to win the game, though, as Keylor Navas produced a stunning save from Juan Carlos's free-kick, whilst Nordin Amrabat fired wide with just Navas to beat.

Captain Weligton deflected a goalbound header from Ronaldo wide and cleared off the line when Isco had squeezed a shot past Kameni.

However, Madrid claimed the ball had crossed the line before the Brazilian hooked the ball to safety and there was another controversial call seconds later as Amrabat was shown a straight red card for an elbow on Marcelo.

Ronaldo had one final chance to snatch all three points at the death, but his header from point-blank range flew over as the hosts were left frustrated.
Last Update: Sep 26, 2015 9:46 pm
RELATED TOPICS