And justice for all 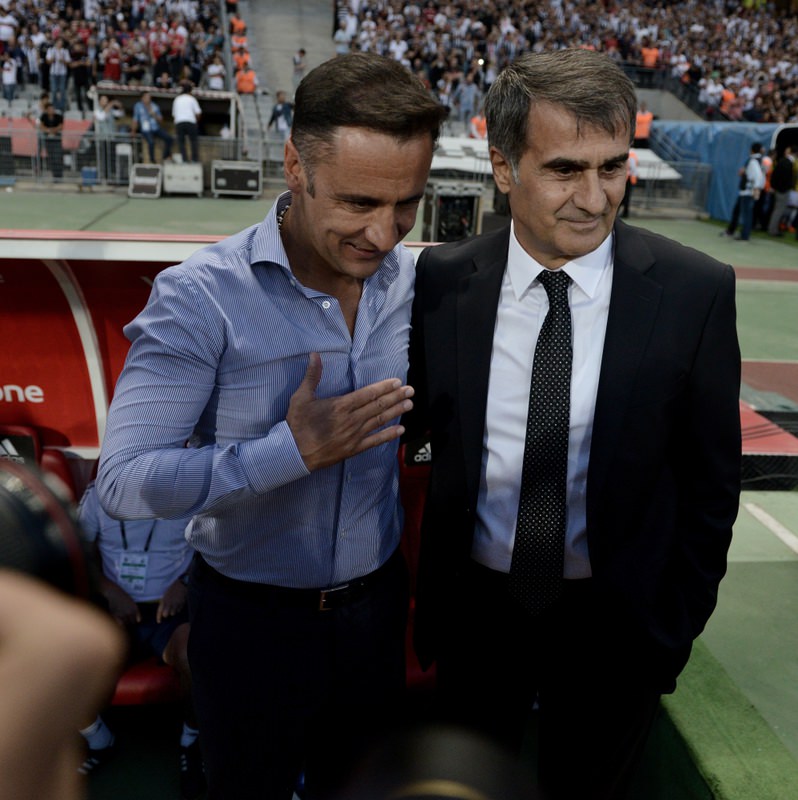 by Arda Alan Işık Sep 29, 2015 12:00 am
I do not understand how Beşiktaş, who has played the most rational and organized games this season, was completely out of control against the team that was possibly the most chaotic team until now, Fenerbahçe. Beşiktaş coach Şenol Güneş and Fenerbahçe coach Vitor Pereira seemed like they traded their football philosophies. Güneş, whom I always praised for his idealist position and reformist role in Turkish football, made Beşiktaş play like a disorganized mediocre Turkish team. On the other hand, Vitor Pereira, whom I always criticized for his pragmatism and cheap ways to achieve victory, studied his homework quite well and pushed an idealist figure like Güneş to take traditional precautions.

However, Beşiktaş's game of course broke down in the past six weeks, but it was mainly because players were unable to adapt themselves to the rhythm of the game. Nonetheless, this time Fenerbahçe and Vitor Pereira's decision to put their defense near the midfield and press Beşiktaş's clumsy defense near their penalty box made Beşiktaş prone to chaotic counter attacks. Şenol Güneş's beautifully organized passing circulations were gone and Beşiktaş players were simply kicking the ball to the other half and hoping to find an opportunity. The first two goals were like gifts from the gods of soccer, who ironically always punished Beşiktaş in the same way when they played better in the past.

On the other hand, Fenerbahçe was not completely sure about their strategy, because their offense was mainly chaotic also, but they were more organized than Beşiktaş. It seems that Vitor Pereira watched every Beşiktaş game and found the right way to prevent Beşiktaş from organizing offenses in the midfield. He basically put his defense and midfield together in the middle and utilized the loneliness of Beşiktaş's hardworking defensive midfielder Atiba Hutchinson. Raul Meireles, Mehmet Topal and Ozan Tufan trio dominated the midfield against scattered Oğuzhan Özyakup, Jose Sosa and Atiba Hutchinson. Added to that, this move scared Beşiktaş's defense so much that two center backs, Ersan Gülüm and Luiz Rhodolfo, positioned themselves so close to their goal and this paved the way for available space for fast Fenerbahçe winger Lazar Markovic to dribble dangerously.

But the most frustrating fact about Beşiktaş for me was Şenol Güneş's reaction to this picture. I expected him to fight fire with fire. In other words, he would make his defense go forward. Nevertheless, Güneş simply put another defensive midfielder in to solve an organizational problem. Yes, Fenerbahçe had more men in the midfield, but the reason for that was Vitor Pereira's clever move to play closer and possessing the ball as much as they can. What Şenol Güneş's decision brought to the game was more Fenerbahçe domination and more disorganized Beşiktaş offense. Thus, even though the team found the third goal and won the game eventually, it was one of the worst games for Beşiktaş and best games for Fenerbahçe.

Fenerbahçe goalkeeper Volkan Demirel was so passive when trying to stop Beşiktaş's first two goals; he could have dived for both headers, but he just watched them. Furthermore, while Fenerbahçe was possessing the ball and dominating the game, he should have left his penalty box and be a part of the game, like Manuel Neuer does for Bayern Munich. On the other hand, Tolga Zengin made two good saves against clumsy striker Fernandao, but he needs to command his area. Still, he is not seen as a dominant goalkeeper in his penalty box; he should terrorize opponent wingers.
RELATED TOPICS