Historic on air apology from referee 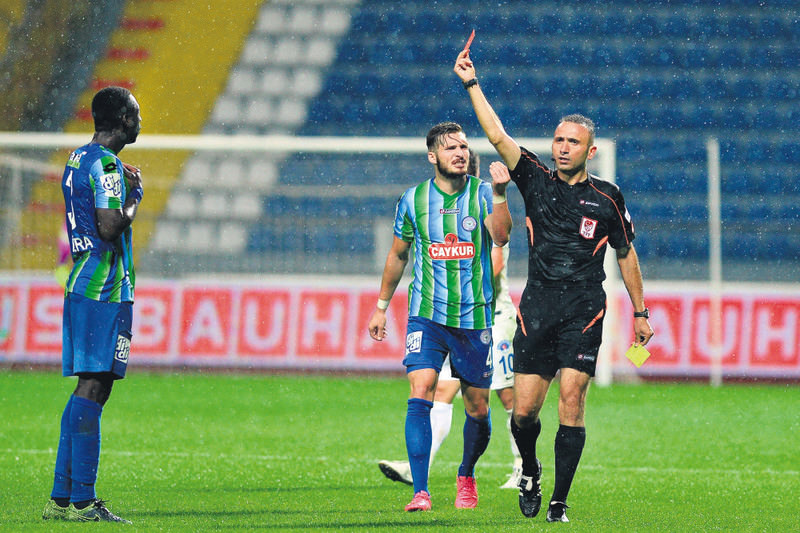 Deniz u00c7oban showed two red cards to Rizespor and towards the end of the match awarded a penalty for the team that had to play with nine men after his controversial decisions.
by Hakan Baş Sep 30, 2015 12:00 am

For the first time in Turkish refereeing history, referee Deniz Çoban apologized for his mistakes during the match between Çaykur Rizespor and Kasımpaşa and said he was nearing the end of his career

While the Turkish football world hotly debated the poor standard of refereeing in the sixth week of the Spor Toto Super League, a referee went live on TV and apologized in front of millions of people. Deniz Çoban, an experienced referee who supervised the match between Çaykur Rizespor and Kasımpaşa, made an unprecedented confession. While the match ended in a 1-1 draw, Çoban showed two red cards to Rizespor and towards the end of the match awarded a penalty for the team that had to play with nine men after his controversial decisions.

Just as Kasımpaşa's coach Rıza Çalımbay was doing an interview on TV, Çoban went on air and said, "I'm deeply sorry for my faulty decisions against both Çaykur Rizespor and Kasımpaşa. I apologize on behalf of the Turkish Football Federation and the High Board of Referees. I think I have to make a decision on my career. I'm deeply sorry. You are deeply sorry. I have done what nobody has ever done. I saw my faults as soon as I went into locker room.

"Believe me your facial expressions in the locker room affected me deeply and I was devastated with the psychological state reflected on your face. I can't express my feelings in that very moment. Despite all my faults you congratulated me. I thank both teams. I am doing now what nobody has ever done before. I am may be nearing the end of my career. But I apologize to both of you."

Çoban's apologies were the culmination of unrest over the controversial decisions and poor performances of the Turkish referees. Last week, even the best referee in Turkey Cüneyt Çakır, who supervised a Champions League final during his career, made bad decisions in the match between Trabzonspor and Galatasaray. He affected the result of the game by not awarding a penalty for Trabzonspor according to many commentators in Turkey.

And in the sixth week, the derby between Fenerbahçe and Beşiktaş, the referee Halis Özkahya became the target of harsh criticism.

The match ended with a 3-2 win for Beşiktaş and the Black Eagles took over the leadership of the table from Fenerbahçe. Fenerbahçe administrators criticized Özkahya for his controversial decisions. A former referee, Serdar Tatlı, said that one of Beşiktaş's goal was offside and Mario Gomez committed a foul before he scored the third goal that gave Beşiktaş the win.

Fenerbahçe's Mahmut Uslu made a vitriolic statement saying, "We never talked about the unfairness done to us. But we see that somebody is trying to create a riot. A complete football disaster happened during the game. The referees still think that Yıldırım Demirören, the president of the Turkish Football Federation and former president of Beşiktaş, is still the president of Beşiktaş. The referee should have given a red card to Beşiktaş's Ersan Gülüm. The referee even did not award us a foul after (Lazar) Markovic was injured. During the third goal Mario Gomez fouled our player and the referee did not see it also.

"Nobody can do such an injustice to a team. They totally destroyed us. We spent millions of euros and put in a lot of effort for our team. The referees favor Beşiktaş."

Half confessing the referee's decisions favored his team, Beşiktaş star Olcay Şahan said after the match, "Yes, the referee affected the result of the match. The Fenerbahçe community can say whatever they want, we are minding our own business. During recent years we were always crying about the faulty decisions of the referees. So let them cry a little."
RELATED TOPICS