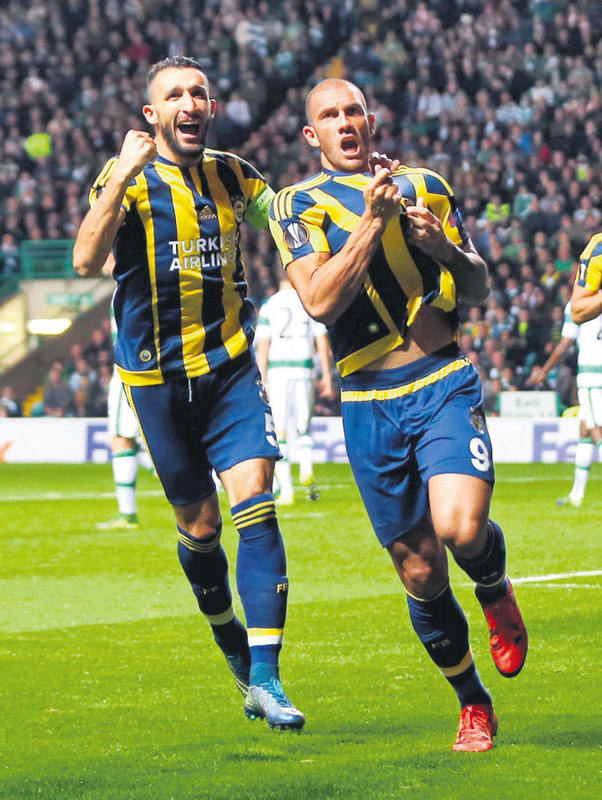 Both Fenerbahçe and Beşiktaş pulled themselves back from the brink of defeat, getting out of tight spots against their powerful rivals Celtic and Sporting Lisbon in the UEFA Europa league. Both sides picked up a point each

Fenerbahçe and Beşiktaş's second UEFA Europa League group matches witnessed comebacks on Thursday with Fenerbahçe's U-turn being particularly memorable after they saved themselves from a 2-0 defeat against Scottish powerhouses Celtic. Fenerbahçe owed their deliverance to Volkan Şen's injury. After he had to leave the pitch, coach Vitor Pereira put on second striker Fernando. Pereira, who experienced a crisis after benching Robin van Persie, did not bench the Dutch heavyweight this time because of his grousing about being cast aside. After the defeats against Molde and Beşiktaş, Fenerbahçe were in dire straits, with Pereira especially feeling the rope around his neck. However, Celtic threw away a two-goal lead as they earned their second draw in the Europa League against Fenerbahçe.

Good fortune was their only ally and there was a familiar sense of frustration for the home fans as Thierry Ambrose's mistake - a weak back header - gifted a chance to substitute Fernandao, who tucked the ball past Craig Gordon. The goal came only minutes before half-time but its influence was prolonged.

Fenerbahçe were still enthused after the break and, three minutes into the second half, Nani slung over a corner that Fernandao headed strongly into the net. The powerful striker might have scored a third but clumsily over-hit his chip and sent it over.

Craig Gordon had to be alert, even if the visitors were far from goal, since Nani and the excellent Diego both struck efforts on target from long range that the Celtic goalkeeper had to push away.

The pressure was sustained, but limited in intensity, and Celtic battled back into contention, not least with Brown returning to prominence again.

James Forrest curled an effort on target and Kris Commons spun and shot with improbable agility and technique but Fabiano stopped both shots. This was Celtic's first encounter with a Turkish opponent. No Turkish club has won a Uefa competition game in Scotland in eight attempts (D6 L2). Fenerbahçe had won all six of their previous Europa League group stage away fixtures - five of them 1-0.

Celtic, who have drawn both their games, will now need a win at Molde to get their European campaign back on track, while it was a commendable point for Fener, who were stunned 3-1 at home by the Norwegian side last time out. Meanwhile, in the other match of Group A, Dutch club Ajax drew against Norway's Molde 1-1 in Norway.

The other Turkish club Beşiktaş also drew against their Portuguese opponents Sporting Lisbon, 1-1, in the UEFA Europa League Group H match at the Atatürk Olympic Stadium in Istanbul on Thursday. Sporting Lisbon's Costa Rican forward Bryan Ruiz scored the opening goal for the visitors in the 16th minute; however, the home team Beşiktaş's Turkish winger Gökhan Töre scored the equalizer in the 61st minute.As of match day two, Lokomotiv Moscow are leading the group with six points. Beşiktaş are in the second spot with four points. Sporting Lisbon came in third with one point. Albanian Skenderbeu are yet to win a point in Group H.

Fenerbahçe coach Pereira said, "We played well until we conceded the first goal. We were put under a little stress after the first goal but we dominated again after Diego Costa came off the bench. It was not easy to bring the match from 2-0 to 2-2 in an away match against Celtic."On Fernandao's substitution, Pereira said, "I already made this decision before Volkan Şen's injury anyway. Things were going worse for us and we decided to continue with two forwards. We could have beaten Celtic 3-2. This draw is a good result for us anyway."Celtic coach Ronny Deila said, "The first goal we conceded from Fenerbahçe turned our luck in a bad direction. We made a stupid mistake at the end of the first half. Fenerbahçe were especially good in the first 20 minutes of the second half. But we gave a hard time to them in the last period. Even if we could not defeat them it is a good result."

Beşiktaş coach Şenol Güneş said, "We could not keep up with the rivals' hard and fast game style. We could have won but drawing was a fair result for both teams. The two matches after this match will change the balance."

Fenerbahçe's Danish defender Simon Kjaer said, "We put ourselves behind the ball in the last two matches. We must learn from our faults."