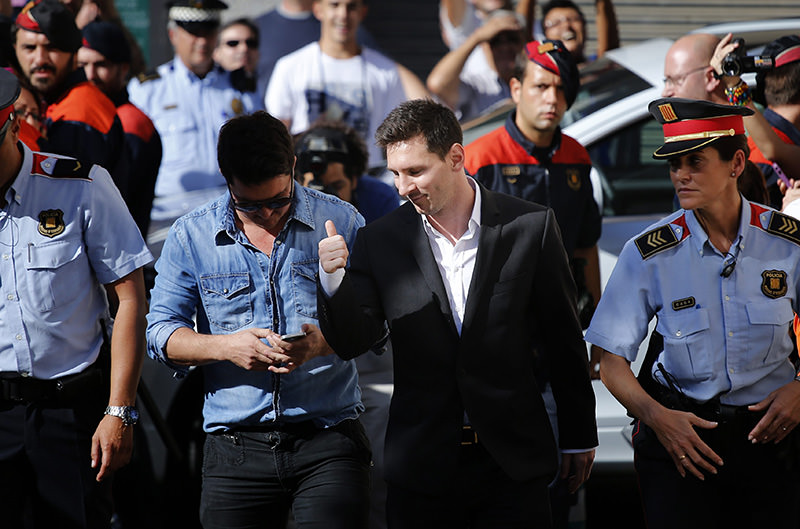 Barcelona F.C. soccer player Lionel Messi, centre right, gestures, as he arrives at a court to answer questions in a tax fraud case, in Gava, near Barcelona (AP Photo)
by reuters
Oct 08, 2015 12:00 am
Lionel Messi and his father Jorge have been ordered to appear in court on charges of defrauding the Spanish tax authorities of more than 4 million euros ($4.5 million).

Although the prosecutor has argued Lionel Messi should not have to answer the charges as his father oversaw his finances, a court document published on Thursday showed the judge in the case had ruled he must still appear as a defendant.

The hearings will take place at a court in Vilanova i la Geltru near Barcelona, the document said.

The court had previously ruled that Messi could have known about and approved the creation of a web of shell companies that were allegedly used to evade taxes on income from image rights.

Revenue had been hidden using companies in Uruguay, Belize, Switzerland and the United Kingdom, according to the prosecutor's office.

Messi and his father paid 5 million euros to the tax authorities as a "corrective payment" after they were formally charged in June 2013.

Lionel Messi has been resident in Barcelona since 2000 and gained Spanish citizenship in 2005.

He is 10th on Forbes Magazine's list of the world's highest-earning athletes over the past decade with income of $350 million.