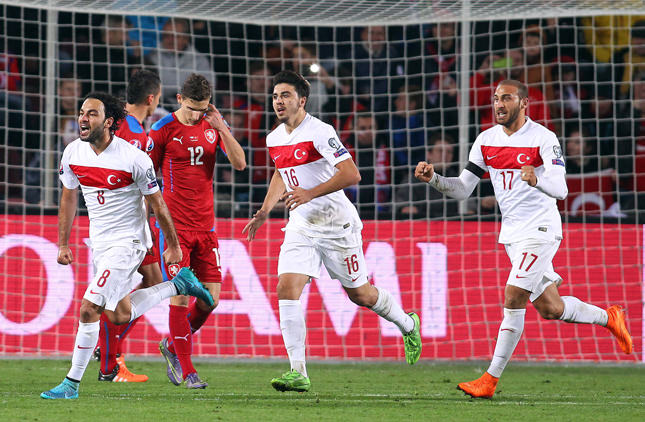 by Daily Sabah Oct 11, 2015 12:00 am
Turkey's 2-0 win over the Czech Republic gave the team a huge boost in their chances of reaching the UEFA Euro 2016 play-offs, for which Turkey and the Netherlands are battling to claim a ticket. Coming in third, Turkey has 15 points against the Netherlands' 13.

Coming on the same day that Turkey witnessed its worst terror attack in its history, the national team's 2-0 win over the Czech Republic brought bittersweet joy for Turks. Turkey vastly increased their chances of making the UEFA Euro 2016 play-offs, as they beat the Czech Republic 2-0 in the qualifying round's Group A match at the Generali Arena in Prague on Saturday. Central midfielder Selcuk İnan broke the deadlock with a penalty kick in the 62nd minute. In the 80th minute, midfielder Hakan Çalhanoğlu doubled the score by finishing in the box after a deadly Arda Turan assist, all but sealing the victory against the Group A runners-up. Iceland, the group leaders, qualified for the finals alongside the Czechs with a match to spare. Kazakhstan and Latvia have already failed to qualify.

Meanwhile, the Netherlands edged out Kazakhstan 2-1 in an away match, with midfielders Georginio Wijnaldum and Wesley Sneijder serving the scoring in Astana.

Both sides have a game remaining after Saturday's fixtures - Turkey faces Iceland, while the Dutch takes on the Czechs.

A draw against Iceland on Tuesday - in the Turkish central province of Konya, where Turkey thrashed the Dutch 3-0 last month - will be enough to thrust Turkey into the playoff stage, regardless of the outcome of the Netherlands-Czech Republic game in Amsterdam.

During Saturday's match in Prague, Turkey's players wore black armbands to honor the twin bombings in the Turkish capital Ankara that killed 95 people on Saturday. Before the kick-off, both team's players stood in silence to commemorate the victims.

Despite the great victory, the national team coach was filled with sadness because of the terror attacks. Making a short statement, Fatih Terim said: "We keep remembering the terrible attacks this morning. What of it, whether we win or lose considering the terrible, bloody attacks. Please excuse me for I don't want to say anything about the match. What shall I say under these circumstances? I hope we talk a lot at a time when we are all happy."

Çalhanoğlu, who scored Turkey's second goal, said, "Unfortunately, I can't celebrate this win. I'm deeply sorry for the attacks in Ankara. I wish for patience, and I hope everything will be fine. I do not know what to say. We have to prepare for the Iceland match."

Meanwhile, the Netherlands are keeping their hopes of qualifying for next year's European Championship alive. "I'm satisfied with this victory," said coach Danny Blind, who earned his first victory after losing his first two matches in charge. The Netherlands went third ahead of the late match in Prague, and Iceland's draw put them on top, one point ahead of the Czechs. But they didn't stay there long.

Turkey are two points ahead of the Dutch. The Netherlands have not missed a major tournament since the 2002 World Cup. The last time the team failed to qualify for the European Championship was in 1984.

"The most important thing was to win," Blind said. "That was the aim, and how it happened didn't matter." Striker Robin van Persie was benched for most of the match, but replaced Klaus Jan-Huntelaar in the 87th minute to make his 100th international appearance.

Elsewhere, despite a 2-0 defeat to Bosnia-Herzegovina, Wales reached their first international tournament since the 1958 World Cup on Saturday thanks to Cyprus beating Israel 2-1. Also qualifying Saturday were 1968 champions Italy and World Cup quarter-finalists Belgium. The top two finishers from the nine groups qualify automatically. The best third-place finisher also qualifies automatically, while the eight other third-place teams can reach the tournament through a playoff.