Suspended Blatter and Platini won't go down without a fight 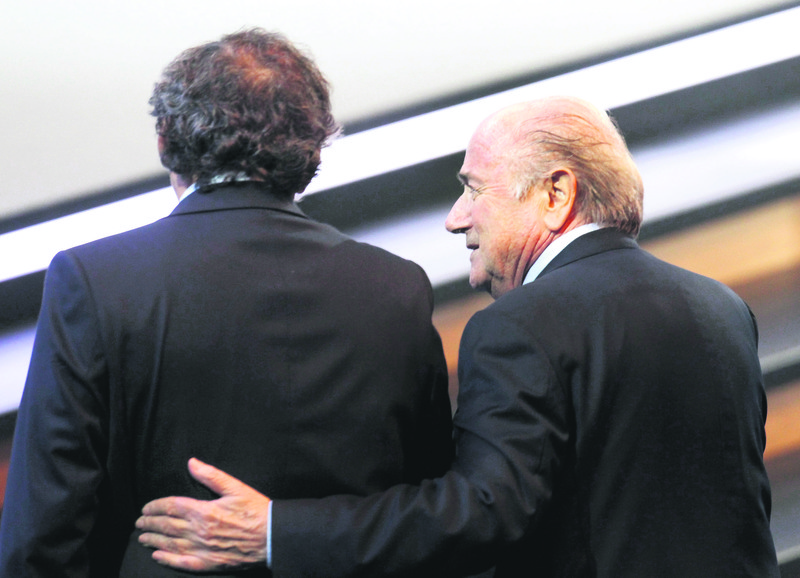 by Daily Sabah with Wires
Oct 12, 2015 12:00 am
Sepp Blatter will battle on despite his suspension as head of world football body FIFA amid corruption investigations, he was quoted as saying by a Swiss newspaper. "I am a fighter," the Schweiz am Sonntag paper quoted him as saying in an advance summary of a brief interview, published on Sunday. "They can destroy me, but they cannot destroy my life's work."

Blatter, who has headed FIFA since 1998, was provisionally suspended from his duties as president for 90 days by the group's ethics committee on Thursday. He has denied wrongdoing an filed an appeal to try to reverse the ban.

The paper cited him as saying the ethics committee had forbidden him to speak about FIFA. While surprised by the ban, "I am doing well and I feel good," he told the paper from his flat in Zurich.

Swiss prosecutors last month opened a criminal investigation of Blatter on suspicions of mismanagement and misappropriation of funds over a television rights contract he signed in 2005 and a 2 million Swiss franc ($2.1 million) payment in 2011 to Michel Platini, president of the UEFA. Platini lodged an appeal Saturday with FIA against his 90-day suspension and was backed by the South American confederation, which called for the European football leader allowed to stand in the presidential election to succeed Sepp Blatter, according to AP.

Although Platini's ban expires before the scheduled election date, he is unlikely to pass FIFA integrity checks after the Oct. 26 deadline for the submission of candidacies.

Although FIFA quickly named an acting president - Issa Hayatou - as required by its statues, UEFA has not elevated its senior vice president - Angel Maria Villar - to temporarily fill Platini's job. Last month, Platini was questioned by Swiss investigators about a payment of 2 million Swiss francs (about $2 million) he received from FIFA in 2011 for work carried out up to 2002.