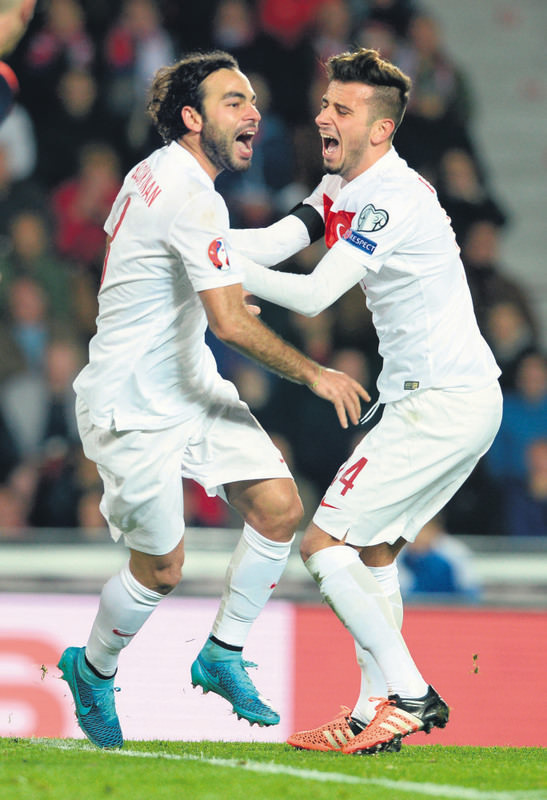 by Arda Alan Işık
Oct 13, 2015 12:00 am
The consensus among Turkish football media pundits after Turkey defeated Czech Republic was that head coach Fatih Terim finally found the squad he has been looking for. After struggling to construct a solid basis, Terim was able to put the right team on the field, and his squad delivered convincing victories against the Netherlands and the Czech Republic. Furthermore, what was problematic about the national team going into these two games was just the wrong squad choice, according to football fans. Terim had nothing to do with the terrible results at the beginning of the qualifiers; he just needed time to find the best players.

However, when we look at the first two games, we see two awful results: a 3-0 loss against Iceland and a 2-1 defeat to Czech Republic at home. In both games, the Turkish national team had five or six players from today's brand new squad and the others were also in good form back then. Thus, Terim again chose the best players, but the picture was so different compared with today, according to Turkish football columnists of course. So, if the individuals were pretty much the same and Terim also had a good squad in both periods, what made the results so different? Did Emre Belözoğlu's departure from the national team change everything that drastically? Or did new right back Şener Özbayraklı double every statistic of his predecessor Gökhan Gönül? I do not think so.

The Turkish national team basically did nothing special; their chaotic style threw them to the bottom at first, then dragged them to third place, despite the team not even being able to beat Latvia. Nevertheless, besides the incomprehensible Netherlands team, the relaxed and satisfied Czech Republic team did not intend to compete with Turkey. Although they had the ball much more than Turkey and tried to build their attacks calmly, Czech coach Pavel Vrba focused on giving an opportunity to young and inexperienced players who were unable to threaten the Turkish national team.

Terim, on the other hand, enjoyed Czech Republic's willingness to play with the ball, since his team has no idea about what to do with the ball. Throughout his career, Terim has only focused on how to disorganize his opponent's strategy, not organize his own. Thus, the Czechs made everything easier for him by patiently circulating the ball around Turkey's half, because Terim was just waiting for a mistake or an occasional opportunity, which eventually happened in the second half.

Terim was already content with just one point, but the penalty was the cherry on the top. It made the Czechs push forward and leave space in their half. Then, the only thing Terim had to do was to wait, as the Czech Republic played more and more risky with every passing moment. The second goal was the prize of Terim's patience for his miserable chaotic game. Turkey had to wait 70 minutes to find enough space to create something. Seventy minutes of dull, defensive patience, just because Terim was unable to implement a decent strategy to create that time and space, anytime and anywhere.

I do not expect anything surprising or noteworthy from the Turkish national team today against another strong team in the group, Iceland. Terim and his team will probably get the ticket to the play-offs, but Turkish society should examine this victory. As Sabah columnist Ahmet Çakar put it in his latest article, "the national team plays primitive football." I believe the Netherlands will learn more lessons from this experience than Turkey, but whatever the result turns out to be tonight, Turkish people deserve much better than Fatih Terim.