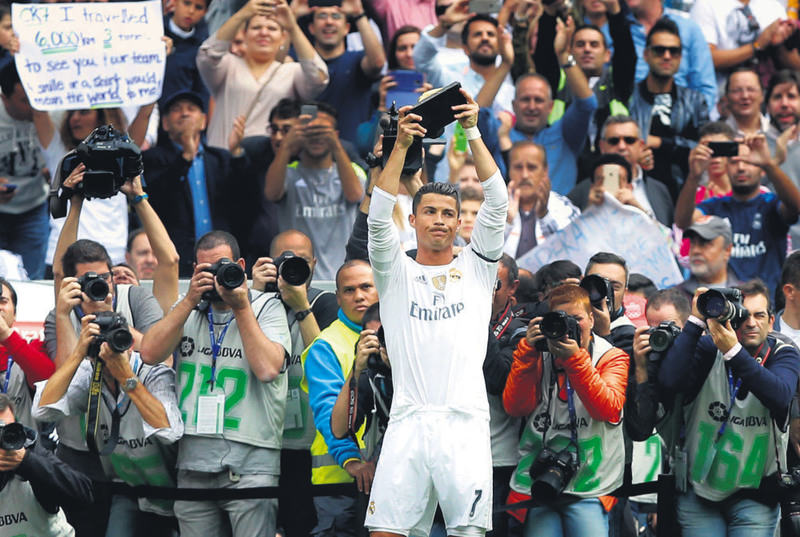 by Oct 19, 2015 12:00 am
Real Madrid and Barcelona pulled two points clear in La Liga when Cristiano Ronaldo set a club scoring record in Real's 3-0 stroll against Levante and Neymar hit four as Barca beat Rayo Vallecano 5-2 on Saturday. Real barely had to shift into top gear at the Bernabeu, where Ronaldo surpassed Raul with his 324th goal in his seventh season in the Spanish capital.

Barca squandered a host of chances, looked shaky in defence and needed a brilliant Neymar performance to come from behind and see off a Rayo side who played attractive attacking football at the Nou Camp.

The contrasting victories for Spain's injury-hit big two lifted them to 18 points from eight matches, with Real ahead on goal difference.

Villarreal, the surprise early front-runners, slipped to third but can reclaim the lead with a win at home to fourth-placed Celta Vigo on Sunday, when Atletico Madrid, who are fifth, play at Real Sociedad.

"Cristiano took on the responsibility because we lacked forwards," Real coach Rafa Benitez, missing regulars Karim Benzema, James Rodriguez, Luka Modric and Sergio Ramos through injury, told a news conference. "He had to lead the team and that's what he did."

The Brazil forward Neymar, clearly managed to lift the team in Messi's absence.

"He (Neymar) has been electric since the start of the season," Luis Enrique told a news conference. "When he gets into the area there is nobody who can stop him."

Sevilla's stuttering start to the season continued when the Europa League holders, who play at Manchester City in the Champions League on Wednesday, drew 1-1 at modest Eibar and are 11th on nine points.

Valencia warmed up for Tuesday's match at home to Ghent in Europe's elite club competition with a 3-0 victory against Malaga that lifted them to eighth with 12 points.