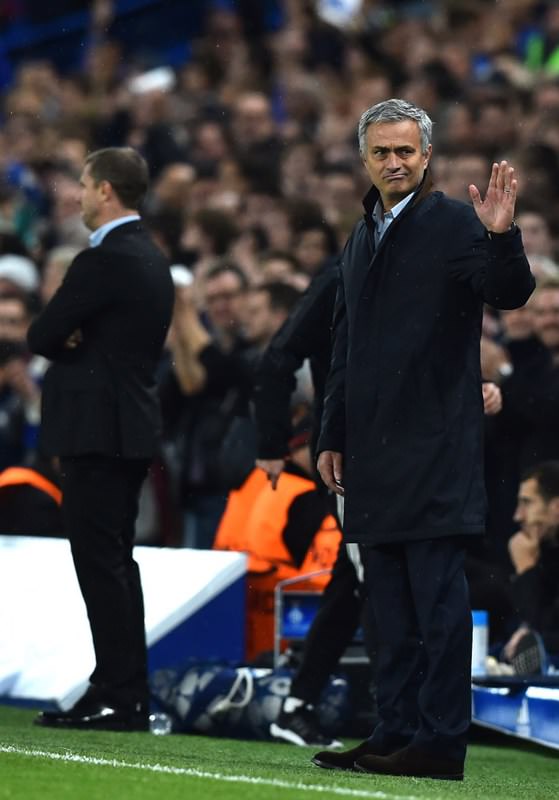 by Nov 06, 2015 12:00 am
Jose Mourinho (above) paid an emotional tribute to Chelsea's loyal fans as the beleaguered Blues boss savored the dramatic 2-1 win over Dynamo Kiev. Mourinho has been under siege from critics who claim his side's woeful run has left him on the verge of the sack.

And with Chelsea's defense of the Premier League title in tatters amid rumors of a dressing room mutiny against his leadership, Mourinho looked like a dead man walking when Dynamo's Aleksandar Dragovic cancelled out his earlier own goal in the closing stages on Wednesday's Champions League tie.

But Brazil winger Willian came to Mourinho's rescue when he unleashed his latest fabulous free-kick in the 83rd minute to secure a vital victory that put Chelsea's bid to reach the last 16 back in their own hands with two Group G fixtures remaining.

Willian's wonder strike was greeted with unrestrained glee in the Stamford Bridge stands as the Chelsea supporters - who had spent the entire match chanting "Stand up for the Special One" and singing Mourinho's name over and over - were rewarded for their faith in the 52-year-old.

"This is my moment. When I came back to this club and we played the first match against Hull, the way the stadium welcomed me was amazing, but it is not comparable to today," Mourinho said.

"This comes at a moment when the results are not good and you [the media] are asking for my head."

"The fans read newspapers, they watch TV, they listen to pundits, commentators' opinions, they read blogs and it's quite unbelievable what they tried to say today. They tried to say, 'we want you here' and probably they also want to say to all of you we want him, let him work. It's a fantastic feeling. To support the manager shows respect and passion for the club. It's amazing. With Chelsea, this is my moment. The club has to be very proud of their fans. I don't have another way to thank them other than to give everything, which I have always done and always will do."
RELATED TOPICS