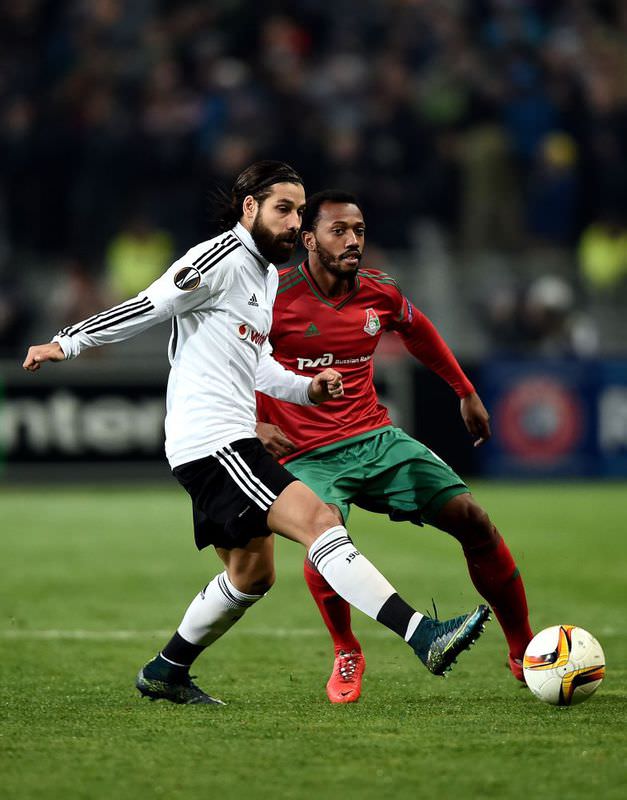 by Arda Alan Işık
Nov 07, 2015 12:00 am
Ali Fikri Işık from hurhaber.com argues that Beşiktaş were unable to beat Lokomotiv Moscow for two reasons:

"Firstly, the Beşiktaş players were unable to deliver the ball to the natural side of their team-mates, and made crucial mistakes while both controlling and passing the ball. Thus, they ruined the rhythm of the game and forced Beşiktaş to make dull horizontal passes. Secondly, the defenders and playmakers of the team mostly opted for the static and safe players when passing. Therefore, Beşiktaş's game was dull, safe and clearly inoperative. Lokomotiv Moscow easily confronted them in the midfield."

Işık is absolutely right about Beşiktaş's fundamental mistakes and this scheme explains why Beşiktaş's form is inconsistent. Nevertheless, there is also another factor that makes Beşiktaş's game so unpredictable, that is, the opponent's strategy for defending Beşiktaş. In the Super League, most of the teams choose the simplest form of defending against Beşiktaş, putting 10 players in front of the goal and praying for a counterattack. But clever people like Lokomotiv Moscow coach Igor Cherevchenko know that they are jeopardizing their defense if they allow Beşiktaş to organize the game in their half. Thus, the best way to prevent Beşiktaş from creating organized attacks is to press the Black Eagle's most problematic area, the defense.

Beşiktaş's defensive line mostly consists of these four players: Ersan Gülüm and Luiz Rhodolfo as center backs and Andreas Beck and İsmail Köybaşı as wing backs. All of those players are not capable of joining and organizing Beşiktaş's offence when there is a considerable press on them. Center backs Gülüm and Rhodolfo do not possess both the technical and mental qualities that will enable them to make productive passes when Beşiktaş need them most. At this point, it is obvious that Beşiktaş need a new player to replace at least one of those center backs. One traditional defender could work with a modern defender who is confident with the ball at his feet and thus pushes the center of the game deeper into the opponents half.

However, the most important lesson that Şenol Güneş should take from both Lokomotiv Moscow games is that his team will only be productive when there is no significant threat. Seeing as Beşiktaş cannot go any further with this situation, there must be radical changes in both Güneş's interpretation of defensive work and the quality of the defenders. Fenerbahçe and Kasımpaşa in the Super League also implemented the same strategy as Lokomotiv Moscow, therefore, it is no longer a secret for Beşiktaş's opponents on how to stop them. Şenol Güneş and his team are at a point where there is no going back, they must raise the stakes and change the nature of their football.

Beşiktaş goalkeeper Tolga Zengin is either getting old or he is not training well, because it is obvious even on TV that he is not able throw himself at the ball comfortably. When striker Oumar Niasse scored the goal for Lokomotiv, Zengin was just watching the goal with his usual shocked face. I respect his experience and the confidence that he gives to his team-mates, but Beşiktaş need a dynamic and reactive goalkeeper to compete with their rivals. Coach Güneş is a fantastic teacher for all goalkeepers and I believe he will create an alternative for Tolga Zengin, at least for his own good.
Last Update: Nov 07, 2015 1:02 am