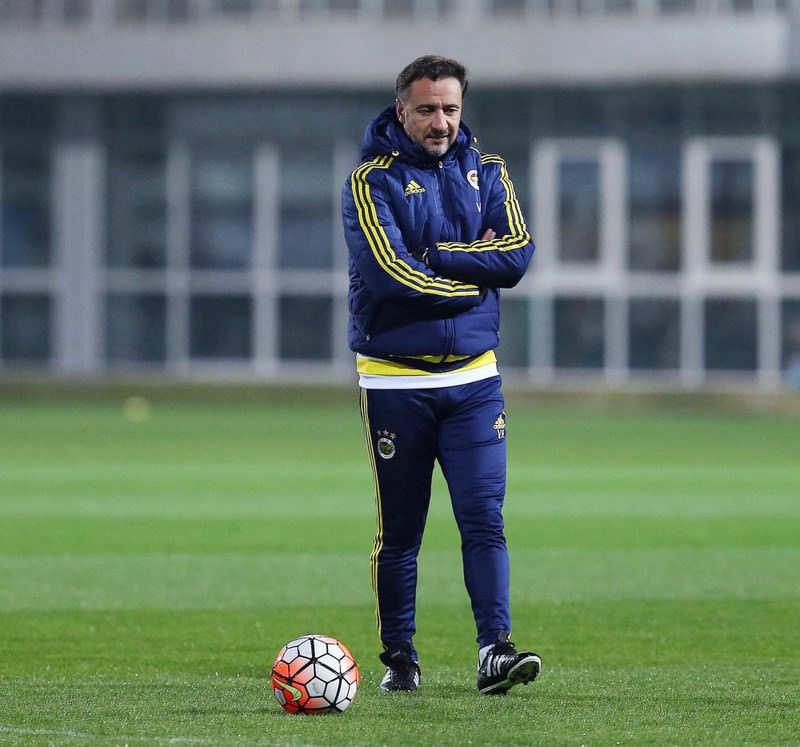 by Arda Alan Işık
Nov 10, 2015 12:00 am
Fenerbahçe's downward slide continued against Torku Konyaspor last Sunday. Fenerbahçe, one of the lowest scoring teams in the Turkish Super League, again played a dull and aesthetically displeasing game against their old coach, Aykut Kocaman and his highly talented and well-prepared defensive backs. Thus most of the action took place around midfield. Broken, beaten and scarred, Fenerbahçe tried to press but Torku Konyaspor easily overcame this pressure. Given Fenerbahçe was favored to win heading into the match, one might say that Konyaspor's defensive methods were aligned with their goals. On the other hand, according to writer Mehmet Demirkol, Fenerbahçe's disorganized and chaotic game stemmed from Vitor Pereira's inability to utilize his players' strengths: "Things do not get better when Robin Van Persie is taken off. The only thing worth noticing in Fenerbahçe's messy game is the harmony between Jose Fernandao, Ozan Tufan and Volkan Şen, a harmony which was created by Şenol Güneş."

Even though I would probably agree with Demirkol, I have to say that he is evaluating Vitor Pereira's performance using the wrong standards. Pereira came to Fenerbahçe as an aggressive and positive coach, and he has always been this way in his career until now. Nonetheless, after some unpleasant results, he suddenly adopted a more conservative and defensive game plan. Seeing as the Turkish League is not the hardest place to implement his strategy if given a lot of time, people must have warned him about coming in with such "high expectations" for the club this season.

However, even if someone has convinced Vitor Pereira to rely on employing an effective yet ugly playing style for Fenerbahçe, I still believe he needs to make some additional defensive adjustments.

As Demirkol said, Fenerbahçe purchased a proven winning strategy from Şenol Güneş and Bursaspor, which led Güneş's team to be the highest scoring club in the league last season. Therefore, why not build a game around Fernandao, Tufan and Şen, rather than relying on Diego Ribas and the chaotic game he creates? Pereira can still maintain his strict defense, but this time it would be, in Rıdvan Dilmen's words, a more balanced team.

As their opponents found a way to distort Beşiktaş's game, the bell clearly tolls for coach Şenol Güneş and his team. First there was Kasımpaşa, then Lokomotiv Moscow and now Bursaspor. All of these games were extremely exhausting for Beşiktaş and cost them four points. As Kasımpaşaspor coach Rıza Çalımbay showed other teams how to stop Beşiktaş , the team should expect the same physicality and pressure in every game.

Furthermore, there is an urgent need for a new center back and a new left wing to replace Ricardo Quaresma. If Beşiktaş wants to get out of this close contact game and play their own game, these two crucial positions need to be filled in order to make the game flow better.

Although he made some fundamental mistakes, I really liked Konyaspor goalie Serkan Kırıntılı's style. He made quick and precise decisions and executed most of the time. Nevertheless, he should pay more attention on his footwork, which will greatly improve his shot-stopping abilities.