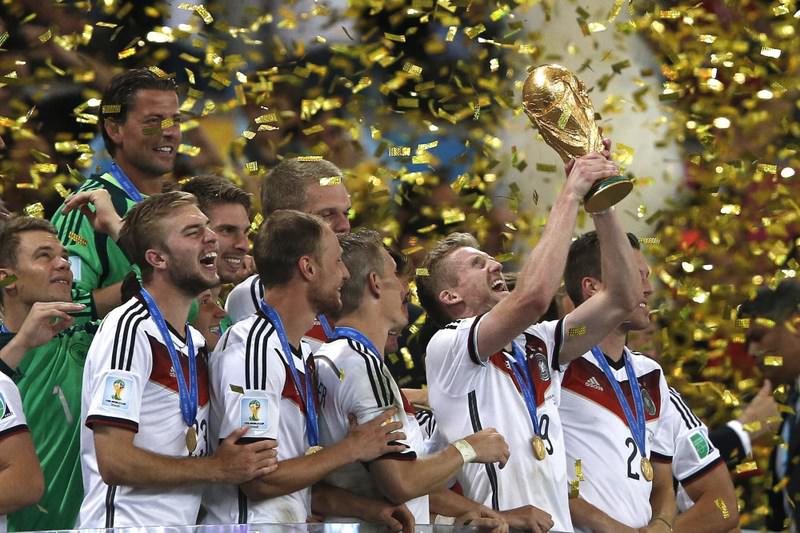 Germany's forward Andre Schuerrle (C) holds the World Cup as he celebrates with teammates after his team's victory in the final between Germany and Argentina.
by Associated Press
Nov 11, 2015 12:00 am

Gianni Infantino, the current secretary general of UEFA, wants to add an extra eight teams to the tournament if he wins the election to replace Sepp Blatter

The World Cup could be expanded to 40 teams if Gianni Infantino is elected as the next president of FIFA.

Gianni Infantino, the face of European competition draws as UEFA's general secretary, discussed his first plans to transform FIFA in an interview with The Associated Press after making a surprising late decision to enter the election.

European football scrambled to find a candidate as a substitute for Infantino's boss, Michel Platini, after the UEFA president was provisionally suspended by FIFA.

Platini is at risk of a long ban once the ethics probe into a 2011 payment from FIFA has been completed, which would make him ineligible for the Feb. 26 election to replace suspended president Sepp Blatter.

Infantino has worked in Platini's shadow, implementing the president's vision from Financial Fair Play for clubs to expanding the European Championship from 16 to 24 teams starting with next year's tournament. If Infantino gets his way, the World Cup also could have to find space for an additional eight teams.

"I believe in expanding the World Cup based on the experience we had in Europe with the Euros," Infantino said by telephone from the campaign trail in South America. "Look at qualifiers now where some teams who have never qualified did and some teams which have always qualified didn't make it.

"So it created a completely new dynamic in the qualification. It created new enthusiasm. If you are serious about developing football it must involve more associations in the best football event in the world: The World Cup."

It would be too soon to swell to 40 teams in Russia in 2018 given that qualifying has already started and it could be problematic for Qatar since the plan is to squeeze the 64 games into 28 days to cope with staging the tournament in November-December 2022 rather than the traditional June-July slot.

But the proposal could help Infantino collect votes from some of the smaller FIFA members outside Europe.

"I don't have a European vision," he said. "I have a vision for football."

The 45-year-old Infantino, a lawyer who has been UEFA's general secretary since 2009, was endorsed by the organization's executive committee to stand for FIFA president only hours before the candidate deadline on Oct. 26.

"We made a draw and my name came out," he joked.

Infantino does not hide that he never previously publicly expressed any desire to run the global game as it recovers from a corruption crisis which had seen Blatter announce plans to quit even before he was suspended along with Platini last month.

"I have been working with Michel Platini for the last nine years. We share many views and many ideas. It's obvious we have the same philosophy on many things but I am a candidate on my own, I will have ideas on my own."

He also insisted he would not stand aside for Platini if the former France captain later wins any appeals.

"I take it seriously which means if I am elected on Feb. 26 in case Michel cannot run, then I will be the FIFA president and I will act as FIFA president," Infantino said. "There is no stepping down or whatever."