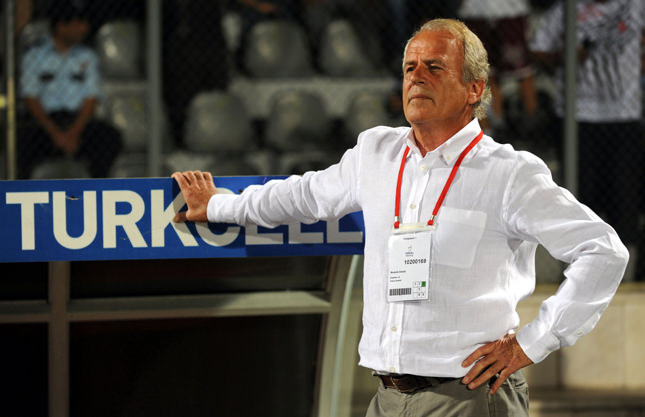 by Daily Sabah with AA Nov 23, 2015 12:00 am
Defending champions Galatasaray announced their new head coach as Mustafa Denizli on Monday after firing Hamza Hamzaoğlu, who won them a league and cup triple last season.

Galatasaray are hoping to stay in the title hunt with the new hiring of Mustafa Denizli. Born on November 10, 1949, Denizli is a former Turkish football player and coach of Galatasaray for the third time in over 20 years.

Denizli has managed many Turkish notable football clubs, including "Istanbul Big Three" (Fenerbahçe, Galatasaray and Beşiktaş) and has won the Turkey's Süper Lig title three times. He is currently the only manager in history to win the Süper Lig with three different clubs.

Denizli also worked outside of Turkey with Alemannia Aachen in Germany, Pas and Persepolis in Iran and Khazar Lankaran in Azerbaijan. He managed the Turkish national team for four years and reached the quarter-finals of Euro 2000.

On 23 December 2011, he was returned to his former club, Persepolis but resigned at the end of the season. He spent 17 years with his hometown club Altay in İzmir, gaining a reputation as one of the best player in the position of attacking left forward in the league history.

The Lions parted ways with Hamza Hamzaoğlu on Wednesday. Despite their modest league position, Antalyaspor boast Samuel Eto'o in attack. The Cameroonian is the league's top scorer with nine goals in 11 league games.

Galatasaray striker Umut Bulut is suspended for the match while left-back Lionel Carole and midfielder Hamit Altintop are injured. The match is due to kick-off at 8.15 p.m. local time (1815GMT) at the Turk Telekom Arena in Istanbul.

Meanwhile, Fenerbahçe meet Mersin Idmanyurdu in an away match on Saturday. Fenerbahce are second in the league while Mersin are second from the bottom. The match at Mersin Stadium begins at 5.00 p.m. local time (1500GMT).