Benitez hanging on at Real Madrid; Zinedine Zidane next? 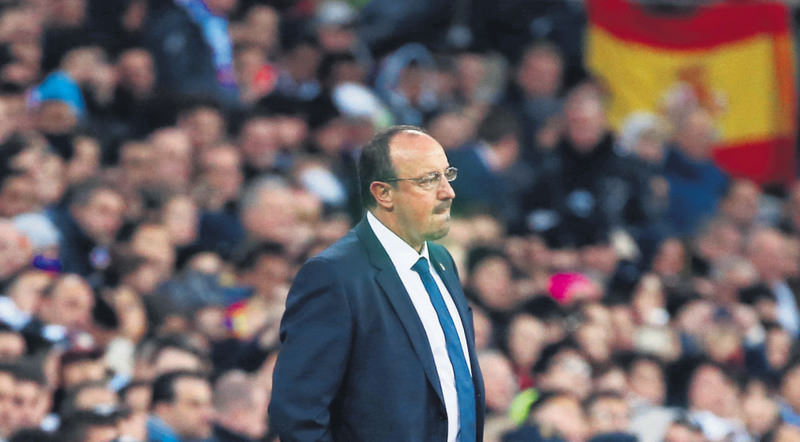 by Associated Press Nov 25, 2015 12:00 am
Real Madrid fans vividly showed their dissatisfaction, frantically waving white "goodbye" handkerchiefs and loudly jeering. It was a clear message to coach Rafa Benitez: It's time for you to go. Madrid president Florentino Perez said it's not happening now, but Benitez will remain in a difficult situation because of the humiliating 4-0 loss to Barcelona at the Santiago Bernabeu Stadium on Saturday. Another setback could mean the end of the line for the coach, no matter what the president says.

Spanish media was already discussing Benitez's replacement, and the name atop the list was Zinedine Zidane, the former France great, who is coaching Madrid's "B" team in the third division. Although he says he is not in a hurry to get promoted, Zidane's name will be mentioned every time Madrid fails to get a win.

"I'm coaching Castilla now. Benitez is the coach of the first team and things are fine like that," the 43-year-old Zidane told Spanish media. "I still have a long way to go." Some fans have also called for the return of Italian coach Carlos Ancelotti, who helped Madrid win its 10th European title two seasons ago. And there have been some reports that Fabio Capello, currently out a job, could be the next in line. To keep the president on his side and stay in the job, Benitez needs to find a way to get Madrid back on track. "We are all responsible and now we have to show unity in order to win the next game and give the fans something to be happy about, which is something we failed to do (against Barcelona)," the 55-year-old Benitez said. "We need to get over this result and focus on the next match as soon as possible."

Things were just fine for the coach until two weeks ago, when Madrid lost for the first time in a Spanish league match at Sevilla. Madrid had been leading the league and was winning games with ease despite a series of injuries to its regular starters.

It advanced to the knockout stage of the Champions League with two rounds to go, and is likely to finish first in its group ahead of Paris Saint-Germain. Benitez defends himself by pointing to the team's numbers this season.

Madrid's only bad result prior to the consecutive losses was a home draw against Malaga, when goalkeeper Carlos Kameni was the man of the

match after stopping everything Madrid's strikers threw at him. Madrid had won four of its first five league games, outscoring opponents 14-1. It drew at Atletico Madrid 1-1, then won the next three matches by at least two goals.

Among the key players injured early in the season were Keylor Navas, Sergio Ramos, James Rodriguez, Gareth Bale and Karim Benzema. The game against Barcelona marked only the second time that Benitez had all of his players available.

"We need to give him some time," Perez said Monday in a hastily scheduled news conference to show the club's "unequivocal" support to the coach. "We are confident that he can turn things around."
RELATED TOPICS