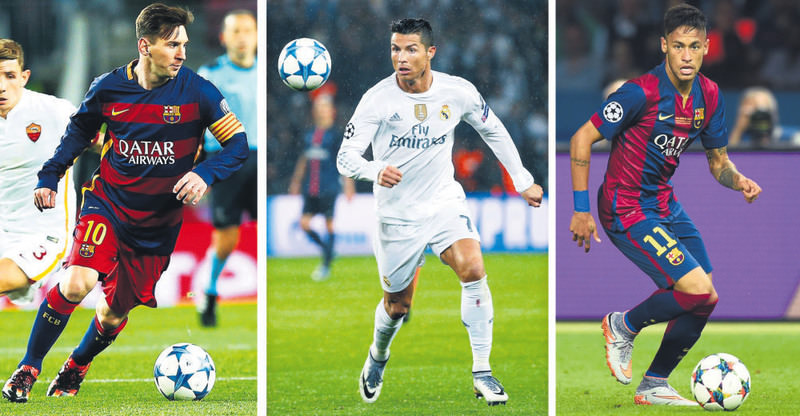 by Anadolu Agency Dec 02, 2015 12:00 am
Lionel Messi and Neymar from Barcelona will compete with Real Madrid's Portuguese star Cristiano Ronaldo for the FIFA Ballon d'Or Award which is given to the year's best player. The contenders for the 2015 FIFA Ballon d'Or Award were announced on FIFA.com. The nominees for the FIFA Ballon d'Or are Cristiano Ronaldo (Portugal/Real Madrid), Lionel Messi (Argentina/FC Barcelona) and Neymar (Brazil/FC Barcelona). Ronaldo received the award last year and the one before. Previously, Messi had claimed it four years in a row. Meanwhile, the nominees for the women's award for best player of 2015 are as follows:

The three nominated goals are as follows:

All of the awards will be presented at the FIFA Ballon d'Or Award ceremony at the Kongresshaus in Zurich on Jan. 11, 2016.
RELATED TOPICS