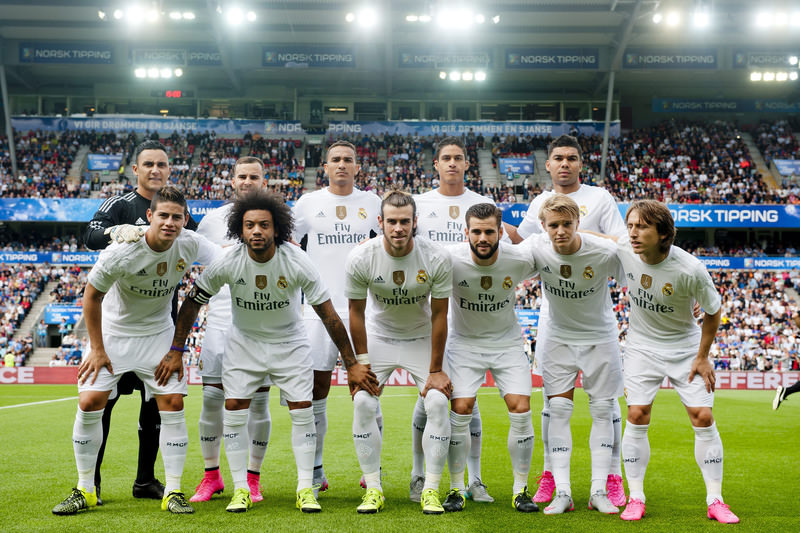 Real Madrid poses prior to the friendly soccer match with Valerenga IF, 09 August 2015. (EPA Photo)
by Associated Press Dec 05, 2015 12:00 am
Real Madrid was disqualified from the Copa del Rey after fielding an ineligible player in its opening round, a Spanish soccer federation statement said Friday.

The statement said Madrid had fielded an "improper lineup" in a 3-1 first-leg win over Cadiz on Wednesday and that the two-match series was settled "in favor of Cadiz."
Madrid disputed the facts laid out in the federation's findings and in a statement released late Friday said it would present an "appropriate appeal."

Madrid coach Rafa Benitez included Denis Cheryshev in his starting lineup, despite the Russian carrying a one-match suspension in the competition for an accumulation of yellow cards last season, when he played for Villarreal on loan from Madrid.

Cheryshev scored the opening goal before being substituted after halftime when Madrid realized its mistake.

Madrid was also fined 6,000 euros ($6,518). Club president Florentino Perez said he would explore "every avenue" to try and restore Madrid to the competition.
The case is another embarrassment for both the club and Benitez, who was already under pressure following a demoralizing 4-0 home loss to archrival Barcelona in the league.

In his ruling, competition judge Francisco Rubio said Cheryshev had been told of his suspension in person, that the suspension had been published by the federation, and that was all that was required.

In its statement, Madrid said the federation had not notified Cheryshev in person, something it said was "the only way the sanction could become effective."

However, the federation's ruling said, "there is no doubt that the player was notified in person and that the imposition of a one-match suspension derived from an accumulation of yellow cards was published."

Cadiz said in a statement that it "could only regret what had happened," but said it was happy to abide by the judgment.

The Spanish league president, Javier Tebas, said he felt elimination from the cup competition might seem an "excessive" penalty but "we must abide by the rules."
RELATED TOPICS