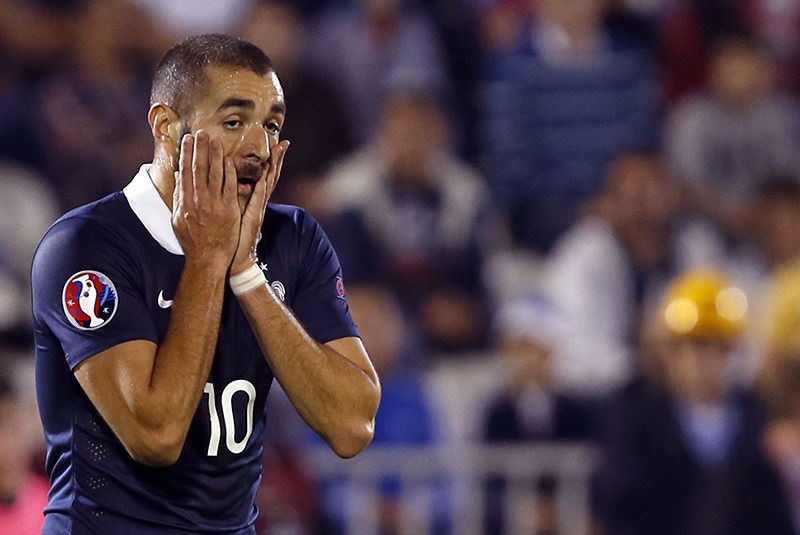 by Dec 10, 2015 12:00 am
The French Football Federation (FFF) on Thursday indefinitely suspended star striker Karim Benzema because of criminal charges of involvement in a sex-tape blackmail attempt against teammate Mathieu Valbuena.

Federation president Noel Le Graet said the suspension would include the 2016 European Championship to be held in France -- which get underway in exactly six months -- unless the case was settled.

"Karim Benzema will not be selected until the situation changes, until there is something new in the case. It is a decision I took as president of the federation," Le Graet told a press conference in Paris.

He added that either the charges had to be dropped or Benzema -- the leading scorer among all current France internationals with 27 goals in 81 caps -- and Valbuena had to reconcile.

Le Graet's announcement came just two days before the draw for the Euro 2016 finals is held in Paris.

Le Graet said that the 27-year-old Real Madrid star was an "extraordinary" player but that the FFF had to take account of public opinion.

Valbuena was left out of France's last game because of the scandal, but he will be allowed to play again, the president added.
Benzema has been charged with complicity in the attempt to blackmail 31-year-old Lyon midfielder Valbuena.

Valbuena has said the sex images were on a mobile telephone that was stolen.

Three men have been detained for the cash demand to have the tape destroyed.

The federation had faced strong pressure over the case.

The scandal has brought chaos to France's preparations for the Euros, with even Prime Minister Manuel Valls calling for Benzema to be excluded from the national team.

"An exemplary attitude must come before even performance, if we want to win over hearts."

"The French team is regularly shaken by scandals which feed a growing disillusionment among our compatriots," Thiriez complained.

French football's embarrassment has been increased because Benzema is alleged to have approached Valbuena at a national training camp on October 5 to encourage him to speak to the blackmailers, one of whom was a close childhood friend.

Valbuena has said that Benzema "indirectly" urged him to pay.

Benzema has replied that he is the target of "persecution" and says he has the support of French coach Didier Deschamps, while others have given him their backing.

"I hope for the French team and for the player, it (a suspension) is not the decision that is taken," French legend Zinedine Zidane this week.

"A player like Benzema is an important player for the team, he can bring so much to the team and I only watch the sporting aspect.
"I hope we will look at that aspect and his personal affair will settle quickly, which is the most important thing. In sporting terms, to cope without a player like that can be complicated."
Last Update: Dec 10, 2015 6:47 pm
RELATED TOPICS