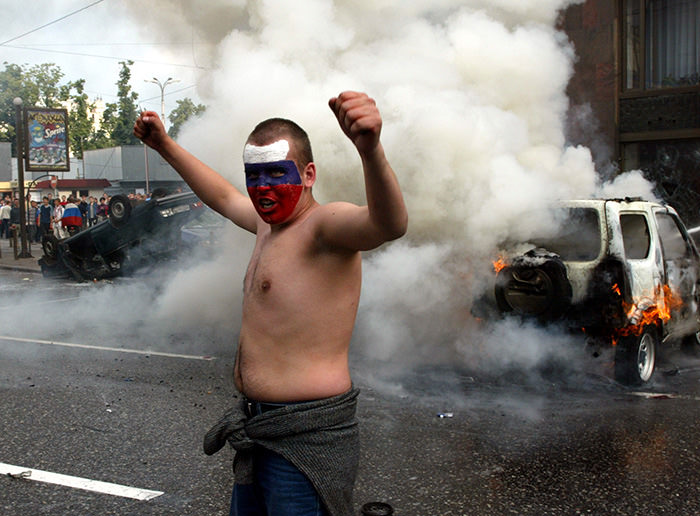 A football fan shouts in front of a burning car in central Moscow June 9, 2002 following Russia's defeat by Japan in their world cup final football match. (Reuters Photo)
by Associated Press Dec 10, 2015 12:00 am
The number of racist displays by Russian football fans has doubled in the country which will host the World Cup in 2018, with most cases going unpunished, anti-discrimination campaigners say.

Researchers from the Moscow-based SOVA Center and the UEFA-affiliated FARE Network logged 92 incidents of discriminatory displays and chants by Russian fans in and around stadiums in the 2014-15 season, against a total of 83 for the previous two seasons put together.

At the World Cup, "there will be incidents inside stadiums, around stadiums. The question will be how frequently they occur, how serious they are," FARE executive director Piara Powar tells The Associated Press.

"Given the closeness to the World Cup, we're now talking about a situation where we are trying to minimize those incidents rather than eradicate them altogether."

Black people were increasingly targeted by Russian fans last season. The report identified 10 cases of abuse of black people or players, compared to five in the previous two seasons. In July, Zenit St. Petersburg striker Hulk, who is black, said he faced racist abuse in "almost every game" in Russia.

However, just one incident of racist or far-right football violence was reported against 21 in the two previous seasons. Researchers linked the sharp fall to better police monitoring of hooligan groups, and an exodus of far-right fans volunteering to fight in the Ukraine conflict.

While Russian soccer authorities are increasingly punishing clubs for racist displays by their fans, many cases went unpunished, and sometimes resulted in black players being disciplined for responding to abuse with rude gestures.

The Russian Football Union "is getting better at sanctioning clubs but there's no apparent plan to work with fans to change the fan culture," Powar says.

Russian officials repeatedly say they are tackling racism, but argue that the problem is no worse than in many other countries.

"Racism in football is a general problem and FIFA is fighting this all around the world," Sports Minister Vitaly Mutko said in September. "Russia is a FIFA member and we are also fighting this occurrence."

FARE also accused Russian fan leader Alexander Shprygin of displaying racist and Nazi symbols, and said he should be removed from a government commission overseeing Moscow's preparations for the World Cup.

Shprygin heads the state-backed All-Russian Supporters' Union, known as the VOB in Russian, which works with government bodies as a combination of a pressure group for fans' rights and the major support group for the Russia national team.

FARE, which helps to prosecute racism cases for UEFA, said Shprygin has been repeatedly photographed with symbols and gestures showing support for far-right and neo-Nazi causes. He "has no place in any organization that is contributing to putting the World Cup on," Powar says.

In an interview with The Associated Press, Shprygin admits operating social media pages that post pictures of far-right and nationalist symbols.

However, Shprygin says such pictures were old photos intended to show how Russian football has changed from the days when the display of far-right symbols was more common. While one picture featuring a white power banner comes with a note saying it was taken in 1996 and that "today they would probably take points off the team," others are posted with no such context, including one picture featuring a death's head symbol similar to that used by the Nazi SS.

Alongside memorabilia from Russian clubs, a display cabinet in the VOB's Moscow office also contains a shirt printed with a message of support for Mikhail "Rikish" Rekudanov, a former Torpedo Moscow player with far-right links who was convicted in 2013 of stabbing to death a man from Kyrgyzstan during a fight.

Shprygin insists that neither he nor the VOB held any racist beliefs, and that Russia was being unfairly portrayed as a hotbed of discrimination in the run-up to the World Cup.

"The All-Russian Fans' Union as an organization has an absolutely negative attitude to racism as a negative occurrence, completely condemns it, and doesn't support it in any way," he says. "But at the same time, we would like to make it known that specifically in the Russian Federation, racism as an occurrence is overplayed."

Shprygin adds that since "in Russia more than 90 percent of the population is all one race," racist incidents are rare.

The report from FARE and SOVA details discriminatory incidents last season in eight of the 11 host cities for the World Cup. In addition, there were cases in seven more towns and cities which will host training bases for teams during the tournament.

There were also cases of Russian fans causing trouble abroad, with FARE citing racist banners displayed by CSKA Moscow fans at a Champions League game in Rome, and Russian fans with far-right symbols at the World Cup in Brazil.

The report also raises concerns that Russian fans with far-right links have gone to fight on both sides in the Ukraine conflict, something that co-author Nataliya Yudina, a Moscow-based researcher with the SOVA Center, considers dangerous.

"On fan forums, fans say that several especially aggressive radicals have gone to fight in Ukraine on the side of the self-declared republics," she says. "That's dangerous because they'll come back here with the fighting experience that they've picked up, and with aggression."

Yudina argues that Russia may succeed in hosting a safe World Cup for foreign fans and players simply by swamping the event with police, but failing to change attitudes in society, saying: "I worry that the World Cup itself could pass calmly, but that after it there may be incidents."

The report does not include incidents this season, including a case in July when Ghanaian player Emmanuel Frimpong was banned for two games by the Russian Football Union after he gestured with a finger in response to apparent racist abuse.