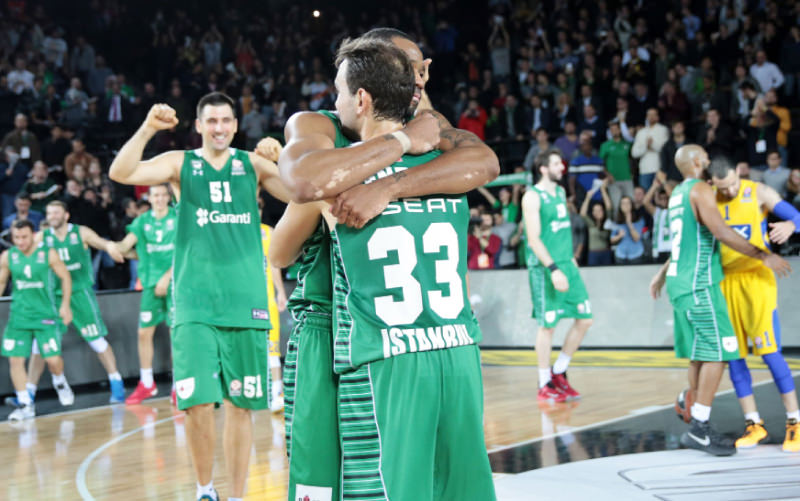 While Darüşşafaka Doğuş managed to qualify for the Top 16 in the EuroLeague for the first time, their rivals Maccabi intentionally tried to miss shots late on to give themselves an opportunity to - paradoxically - increase their lead to the 11 points they need to advance

Newcomer Darüşşafaka Doğuş made history by qualifying to the Top 16 for the first time despite being defeated by Maccabi Tel Aviv 66-70 on the road, but it was a pyric victory. Maccabi needed to win by at least 11 to overtake Darüşşafaka and qualify. So Maccabi strained every nerve and tried to extend the match at the risk of causing a scandal. The Israeli side deliberately did not use its attacking opportunities in the last 90 seconds so as to force overtime and give themselves a better chance of opening an 11-point lead - with 90 seconds left, the Israelis had no chance of getting an 11-point lead. However Darüşşafaka invalidated their rivals' vigilance and decided not to defend. Maccabi, who finally realized that they could not extend the match, had to use the late attacks and left the court with a 70-66 win. As a result, both teams finished with 4-6 records, but Darüşşafaka placed fourth and went through, while Maccabi are fifth and will instead play in the Eurocup for the first time.

Maccabi coach Zan Tabak confessed to their behavior saying: "We did not do the right thing sportsmenship-wise. We wanted so much to qualify for the Top 16. That's why we did it. However If I could go back to the past, I would not have done so."

Darüşşafaka Doğuş coach Oktay Mahmuti said, "I don't blame anyone. Everybody's first target is to win. If the result went in their favor, they would return to their country as heroes. Would I do the same? I don't know. I'm happy for Turkish basketball. The fact that there will be three Turkish teams in the Top 16 is a very important achievement."

"We worked hard for this and deserve to be among Europe's best teams," Darüşşaffaka forward Milko Bjelica said.

As for the game, Darüşşafaka opened the fourth quarter with a 13-2 run to go up 62-52. Maccabi rallied back in the closing minutes and tried to force a tie, but Reggie Redding ended all hopes with 19 seconds left, when he intentionally made only one of two free throws to ensure the game would not be extended. Taylor Rochestie's triple won the game for Maccabi. Sylven Landesberg paced Maccabi with 14 points. Furkan Aldemir led Darüşşafaka with 12. Third-place Brose Baskets Bamberg beat Dinamo Banco di Sardegna Sassari 86-54 as Nikos Zisis tallied 16 points. Bamberg took commanding control in the second quarter, led 49-33 at halftime, and never looked back. They finished with a 6-4 record while leaving already-eliminated Sassari winless in 10 regular season games.

Elsewhere, Euroleague holders Real Madrid reached the competition's Top 16 stage after a 97-65 home rout of Strasbourg. Needing a win to avoid an embarrassing early exit, Real dominated throughout and came out on top thanks to 16 points by forward Jeffery Taylor and 14 from guard Sergio Rodriguez.

"We made a poor start in a fiercely competitive group but hit top gear when we needed to and I expect better results in the Top 16," Real coach Pablo Laso told Euroleague television. Real squeezed through after winning their last three games to finish the preliminary group stage with a 5-5 record.

Also on Thursday, Bogdan Bogdanovic's game-winning tip-in with 4.9 seconds to go, lifted first place Fenerbahçe past Khimki Moscow Region 70-68. Fenerbahçe finished the regular season with an 8-2 record in first place, while Khimki qualified for the Top 16 with a 5-5 record. The teams traded leads often in the second half as the game went down to the wire. At the very end, Bogdanovic put back Ekpe Udoh's missed free throw with a tip-in and then Udoh sealed the victory by stealing the ensuing inbound pass. Jan Vesely paced the visitors with 19 points and six rebounds. Bobby Dixon was clutch in the fourth quarter and finished with 16 points, while Tyrese Rice scored 15 of his 19 points in the first quarter to lead Khimki.
RELATED TOPICS