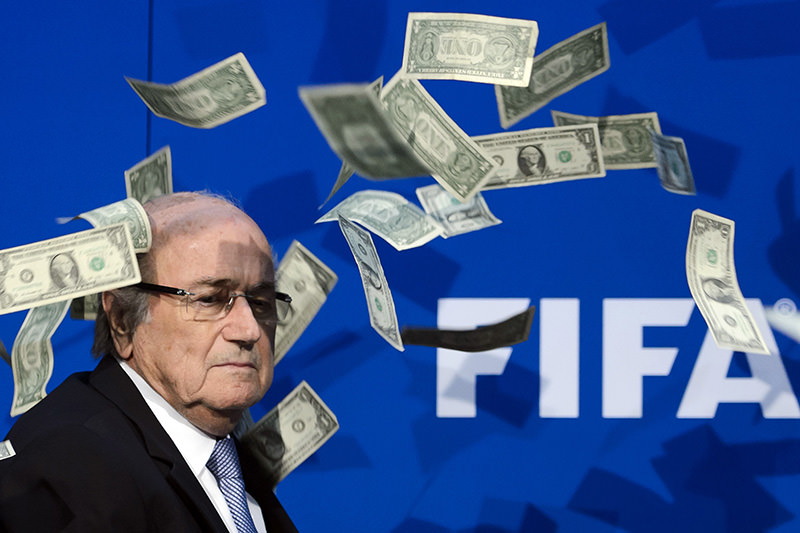 This file photo taken on July 20, 2015 shows FIFA president Sepp Blatter looking on with fake dollars note flying around him thrown by a protester (AFP photo)
by Dec 21, 2015 12:00 am
A FIFA court on Monday banned Sepp Blatter and Michel Platini for eight years after finding them guilty of abusing their positions over a two million Swiss francs payment that was made to the suspended head of European football.

Blatter and Platini, who had been the most powerful men in football, insisted that the payment made in 2011 had been legitimate following an oral contract.

But FIFA's judges said the "assertion of an oral agreement was determined as not convincing and was rejected by the chamber".

The statement by the court said both showed "abusive execution" of their powers.

Blatter's "actions did not show commitment to an ethical attitude, failing to respect all applicable laws and regulations as well as FIFA's regulatory framework," the court said.

In the case of Platini, the court said he "failed to act with complete credibility and integrity, showing unawareness of the importance of his duties".

For Blatter, 79, the lengthy ban almost certainly marks the end of his career in football administration.

For Platini, 60, the suspension has derailed his hopes of replacing Blatter at the top of world football's governing body, after having been the favourite to claim the post.

Appeals to an internal FIFA committee and the Court of Arbitration for Sport are however possible for both men.

Blatter spokesman Klaus Stoelker told AFP when asked if the long-serving FIFA president would launch an appeal at the Lausanne-based court, he said, "I can confirm this, yes."
Last Update: Dec 21, 2015 12:28 pm
RELATED TOPICS