Özil and Gündoğan on Dream Team 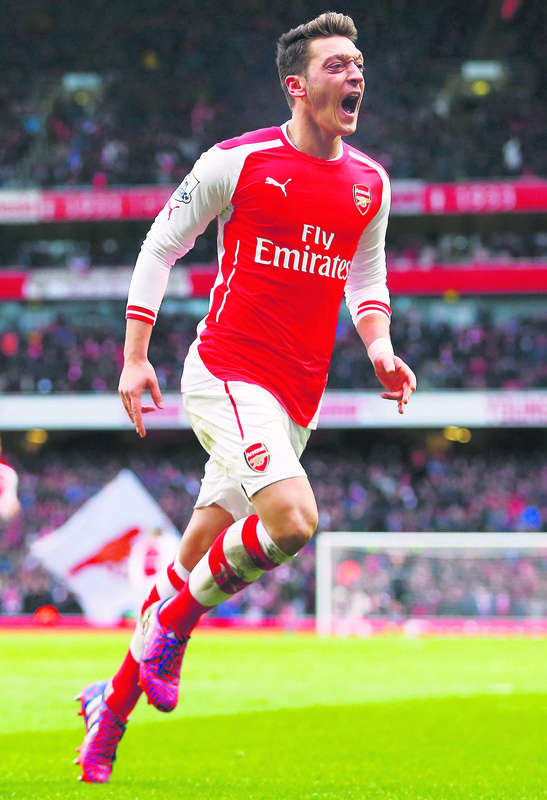 by Daily Sabah Dec 24, 2015 12:00 am
Turkish-German stars Mesut Özil of Arsenal and İlkay Gündoğan of Borussia Dortmund were selected alongside Lionel Messi for the CIES Football Observatory's 2015 Dream Team, which has no place for Ronaldo, Suarez or NeymarOn its website, the CIES (International Center for Sports Studies) Football Observatory released the dream team for 2015, and it has some surprising inclusions and exclusions. While two German-Turkish stars, Mesut Özil and İlkay Gündoğan, are on the list, two of the final three FIFA Ballon d'Or nominees are not. Five players from the Premier League make the list, including three from Arsenal. Barcelona's treble-winning team has only two players on this team.

The team is based purely on the individual statistics of players in Europe's top five leagues only - English Premier League, Spanish La Liga, Italian Serie A, German Bundesliga and French Ligue 1. The stats are collected from Jan. 1, 2015, to date.

The players are picked according to a 4-2-3-1 formation, and outfield players are spread among two center-backs, two full-backs, central midfielders, attacking midfielders and forwards. A player can be selected only if he has played the equivalent of 25 games in the league - i.e. 2,250 minutes.

According to the site, players are picked based on six different aspects of their performances over the year: shooting, distribution, interceptions, take-ons, chances created and their ability to duel with opponents to win the ball and deny them chances to create or score.

Bayern Munich goalkeeper Manuel Neuer makes the team, as he almost always does when such teams are announced. On defense, Barcelona's Dani Alves and Arsenal's Nacho Monreal were selected as the full-backs, while PSG's Thiago Silva and Juventus's Giorgio Chiellini were named the center-backs.

In central midfield, Borussia Dortmund's İlkay Gündoğan is the only other Bundesliga player to make the team, and he was paired alongside Arsenal's Santi Cazorla. The attacking midfield spot went to a player with 101 assists since August 2008: Arsenal's Mesut Özil. The German playmaker has already made 15 assists in the first five months of this season alone. If he can make five more assists, he will break the record that belongs to Thierry Henry of the Premier League.

The attacking midfielders on either side of Özil are Kevin De Bruyne, for his performances with both Wolfsburg and Manchester City, and Chelsea's Eden Hazard, last season's PFA Player of the Year. The forward up front is none other than Lionel Messi, who was instrumental in Barcelona winning five trophies in the calendar year, including his second treble with the club in the 2014/15 season.

Players such as Real Madrid forwards Cristiano Ronaldo and Gareth Bale and Barcelona forwards Luis Suarez and Neymar also missed out. Both Neymar and Ronaldo are in the running for the Ballon d'Or trophy in January. According to the report, Suarez finished second in the position for forward, followed by Neymar, Ronaldo and Bale.

A number of world-class players missed out since they did not satisfy the minimum minutes criteria due to injuries. Players such as PSG's Zlatan Ibrahimovic and David Luiz -- both of whom won all domestic trophies in France - Manchester City's Yaya Toure and Sergio Aguero, Bayern Munich's Jerome Boateng and David Alaba and Barcelona's Jordi Alba all missed out.