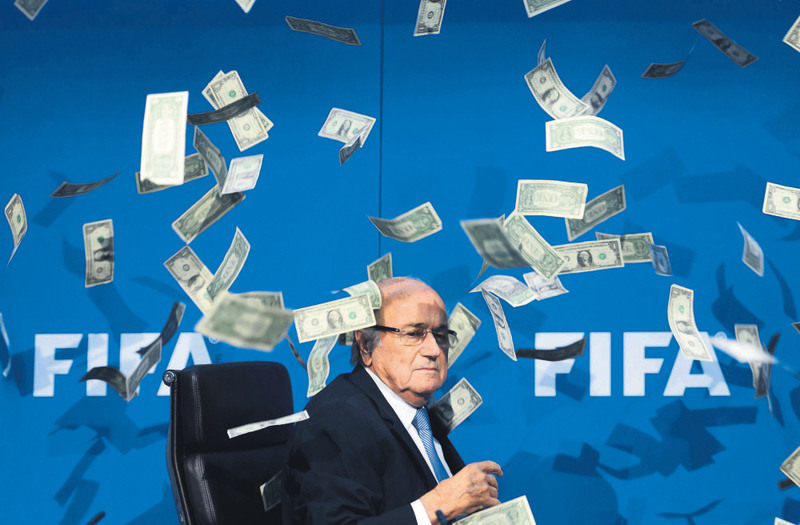 Bribes, doping, even more bribes, the sky seems to be the limit in the strictly cash underbelly of sports marketing and fixed sporting glory. The jury is still out on whether the federation chiefs who dominate a sports industry that accounts for up to $700 billion a year - one percent of world GDP - will get the message though.

"If Blatter and Michel Platini are banned that will have no impact on other sports. But for sure there are other sports with similar problems," said Sylvia Schenk, a sport expert for the Transparency International anti-corruption group.

Patrick Nally, a British entrepreneur who was one of the pioneers of sponsorship for the Olympics and other mega-events, is among the critics who see hope.

He said the focus put on FIFA, football's world body, and the International Association of Athletics Federations (IAAF) means other governing bodies can expect the spotlight.

"It will mean all federations will become more transparent and I think we will see the International Olympic Committee taking a more active role in helping and encouraging federations to meet all the minimum criteria expected of international organisations."

An early wake-up call at the luxury Baur au Lac hotel in Zurich on May 27 blew the lid on soccer's chicanery.

The first seven FIFA officials were hauled away in a raid two days before Blatter had expected to seal an easy fifth term as head of football's world governing body.

US attorney general Loretta Lynch said corruption was "rampant, systemic and deep-rooted" in football. Blatter said he suspected the arrests were politically motivated. The battle was on.

Blatter got his vote after his only challenger Prince Ali bin Al Hussein, a FIFA vice president from Jordan withdrew. But four days later Blatter announced that a new election would be held on February 26 and that he would stand down.

Now 39 football officials and business executives who face charges in US courts account for $200 million in bribes given or taken.

A Swiss criminal investigation into FIFA's finances delivered the knockout blow. Blatter is a formal suspect for "criminal mismanagement", European football boss Platini was named in the inquiry over a "disloyal" two million Swiss franc ($2 million/1.8 million euro) payment he received in 2011.

FIFA have banned both men from football for eight years. That means Platini cannot even accept a ticket for the European Championships in his native France in 2016. Blatter and Platini both strongly deny any wrongdoing. But only an appeal miracle will get Platini into the FIFA election in February.

Swiss investigators are also looking into the FIFA vote in 2010 to give the 2018 and 2022 World Cups to Russia and Qatar. German police have launched a probe into whether German organisers paid money to get votes for the 2006 World Cup.

The result looks tight. The fallout from the scandal has already been enormous though with sponsors warning they could pull out of FIFA deals if reforms are not convincing.

"Some think it will never change, while others want radical change now. Neither belief is right. It will take time for deep changes at FIFA."

The IAAF has been in the firing line all year over widespread "state-supported" doping in Russia, Kenya and other countries.

A World Anti-Doping Agency (WADA) report told how one controller had to jump from a window in the middle of the night to stop local police taking samples he had gathered.

But British running legend Sebastian Coe had only been IAAF president for a few weeks when his veteran predecessor Lamine Diack of Senegal was arrested by French investigators.

Russia is suspended from international athletics and racing against time to get back for the Rio de Janeiro Olympics in August. More criminal charges could follow and WADA is to release a new report in January likely to widen the agony in athletics with more countries named and shamed.

Coe has been forced to give up his role as a Nike "ambassador" but he defended the IAAF before the British parliament, insisting: "No, it's not a corrupt organisation." Scandal has not stopped football and other sports attracting ever more money.

Other sports are also attracting extra revenues and are guilty of FIFA-style chicanery, according to Schenk.

"Sport could now experience a Big Bang because of FIFA-gate," said sports economist Vincent Chaude, deputy head of the French group Sport and Citizenship. "The model for sport's organisation has reached the end of its time. This is the ultra-communication society which demands more transparency."

US prosecutors have played a leading role in pressing FIFA and Switzerland, the home of most leading sporting federations, has changed its legislation to make the sporting barons more accountable.

"The more the sporting movement delays making reforms the more governments will be tempted to get a grip through the criminal system," said Jean-François Vilotte, former head of France's Regulation Authority for Online Games.