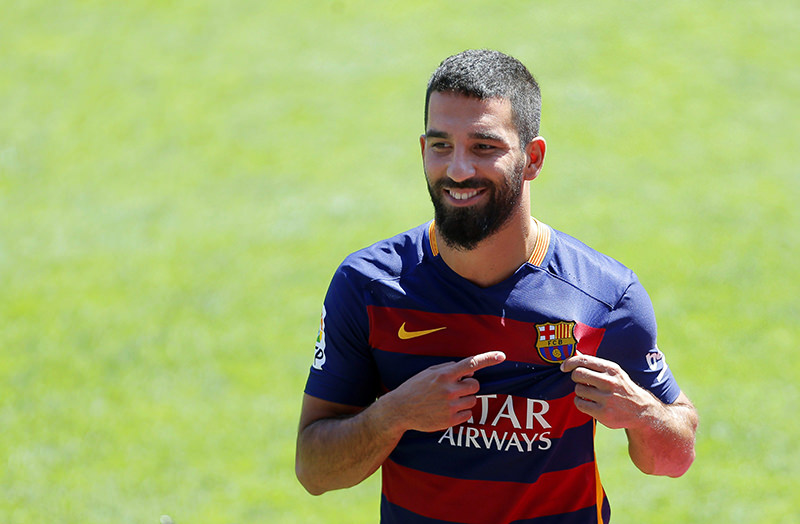 FC Barcelona's new Turkish midfielder Arda Turan poses for photographers, July 10, 2015. (EPA Photo)
by daily sabah Jan 05, 2016 12:00 am
Barcelona's transfer window has opened and they are surely letting everyone know about it—with 77 transfers all at once.

Barcelona registered 77 new players across the club's various teams from all age groups as their 14-month FIFA-imposed ban from signing players ended Monday.

With the La Liga side's transfer ban lifted, Arda Turan is now eligible to make his belated -and much awaited- debut as midfielder in the Catalan team.

Another high-profile transfer, Aleix Vidal will also make his debut as defender alongside Turan in Wednesday's Copa del Rey clash at home to local rivals Espanyol.

The Barcelona and Espanyol match ended with a goalless draw in La Liga on Saturday.

With their UEFA Super Cup and Club World Cup victories this season, Barca are now locked on retaining their titles in the Champions League, La Liga and Copa del Rey in 2016.

In 2014, Barca had breached FIFA rules on signing players under the age of 18 and had been banned from registering new signings in two previous transfer windows – January 2015 and summer 2015. However, they were not blocked from doing deals