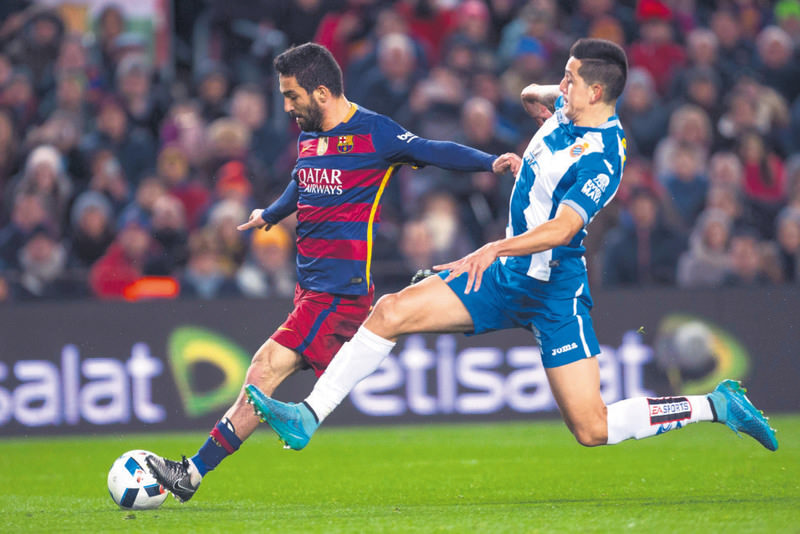 by Anadolu Agency Jan 09, 2016 12:00 am
Spanish football giant Barcelona's Turkish midfielder Arda Turan expressed his excitement about playing for "Barca" for the first time in his statement to Catalunya Radio on Thursday.

"I am living my dream in Barcelona. Just imagine, you are playing with Messi on the same pitch. Nothing is more important than this," Arda said.

Making his debut for Barcelona in Copa del Rey (Spanish King's Cup) Round of 16 first leg against city rivals Espanyol on Jan. 6, Turan said he was very happy to play for Barca and winning was important. He said being sidelined for six months because of a FIFA-imposed transfer ban on Barca was difficult.

"When you don't play with the team, it is very difficult to coordinate with teammates on the pitch. I did not feel bad (while I was not playing) because everyone helped me a lot," the Turkish international said. Arda also praised the Argentine star of the team, Lionel Messi. "I have not changed my mind since I saw him for the first time. Messi is the best football player in the world. But watch out, Neymar is coming," the 28-year-old midfielder said.

Arda, who won the 2013-14 La Liga title with Atletico Madrid, said he had good memories in Barcelona's home ground Nou Camp. Madrid triumphed last year by getting a draw against Barcelona at Nou Camp in the last match of the season. "It was one of the most difficult titles in world history because we outshone Real Madrid and Barcelona despite both having the best players. We believed and did an excellent job," Arda said. Asked about the Barcelona-Atletico Madrid league game on Jan. 30, Arda said it would be emotional for him to play against his former team. "It is much better to play against Atletico at home rather than at Vicente Calderon," he said.

Arda said a Turkish international playing for Barcelona was important for a new generation of players in Turkey.

"Playing for Barcelona is very important for me and the Turkish kids as they start to believe they could be successful following my lead and working hard," he said.

Turan scored 22 goals and had 32 assists in 177 matches in his four-year spell at Atletico Madrid. With a transfer fee of 34 million euros on July 6, the Barcelona signing became the most valuable Turkish player in history.
RELATED TOPICS