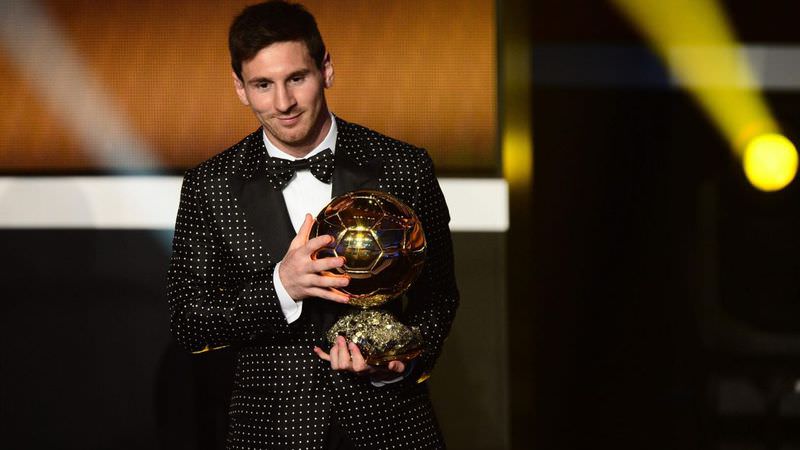 by reuters Jan 11, 2016 12:00 am
Lionel Messi reclaimed the FIFA Ballon d'Or award for the world player of the year on Monday from his great rival Cristiano Ronaldo who had walked off with the award for the previous two years.

The Barcelona and Argentina forward took 41.33 percent of the votes followed by the Portuguese and Real Madrid forward (27.76 percent), with Brazil and Barcelona forward Neymar third (7.86 per cent).

"It is a very special moment for me to be back here on this stage, winning again another Ballon d'Or after being there in the audience watching Cristiano win," said Messi as he accepted the award at the end of a drawn-out 90-minute ceremony.

"It's incredible this is my fifth."

Barcelona's Luis Enrique was voted coach of the year while United States World Cup winner Carli Lloyd, who scored a hat-trick in the final against Japan, was named women's player of the year.

Initially started as the FIFA World Player of the Year award in 1991, it became known as the Ballon d'Or after merging with France Football's European footballer of the year award in 2010.

The award, shared exclusively between Messi and Real Madrid's Ronaldo since Brazilian Kaka won in 2007, has been heavily promoted by FIFA and was broadcast to 190 countries with 1,100 guests including players and coaches attending the ceremony.

But it is not everyone's cup of tea and some critics, such as Arsenal coach Arsene Wenger, say it is not appropriate in a team sport.

"I'm a big enemy of the Ballon d'Or. Who will win it? You know as well as I do that it's certainly Messi who will win it. I think so. Overall I'm not a big fan of that," the Frenchman said earlier on Monday.

More surprisingly, Spain captain Iker Casillas -- the former Real Madrid goalkeeper who now plays for Portuguese club Porto -- was among those who did not vote.

Despite a red carpet and plenty of glitz, the event had a low-key air of predictability about it and was held against the backdrop of FIFA going through the worst corruption crisis since it was founded in 1904.

The sport is facing criminal investigations in both Switzerland and the United States, where some leading FIFA officials are among 41 individuals and sports entities who have been indicted on corruption charges.

Outgoing FIFA president Sepp Blatter, normally a central figure in the ceremony, was not involved after being banned for eight years by the Ethics Committee in December and there was no President's Award, usually given out by Blatter for outstanding services to the game.

Acting president Issa Hayatou played a low-key role, reading a brief speech before the start and appearing on stage when the awards for best player and women's player were presented.

Ronaldo said the players did not want to discuss FIFA's problems.

"We avoid answering this kind of question," he told a press conference before the ceremony.

"We are professional football players, we compete every week, every day, we train and we just focus on that. These things happen not just in football but in life, and the best thing would be no corruption anywhere."

In terms of individual achievement, Ronaldo had slightly the better in the last year, scoring 54 goals in 52 games for Real Madrid, compared to Messi's 48 in 53.
Last Update: Jan 11, 2016 11:06 pm
RELATED TOPICS