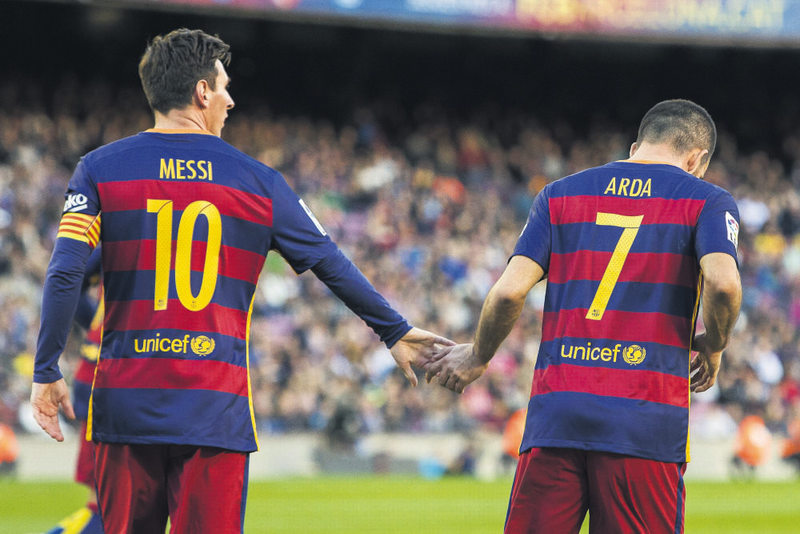 When Arda Turan made his La Liga home debut with Barcelona, it took him just eight minutes to set up Lionel Messi for Barca's opening goal. Following some outstanding teamwork from the home side, the Turk picked up the ball on the edge of the area. His pass found the Argentine in the 6-yard box, leaving Messi little to do but subtly guide the ball past Andres.

Arda's last La Liga assist came almost a year ago. Coincidentally, that was against the same opposition, Granada, on Jan. 18, 2015, when he set up Raul Garcia to seal the points for Atletico Madrid in a 2-0 home win. Barcelona coach Luis Enrique fielded a completely new midfield lineup composed of Sergi Roberto - playing in Sergio Busquets' role - Ivan Rakitic and Arda.Enrique praised Arda Turan, saying: "As long as he plays more matches, we will see him adapt to the system more. We haven't yet seen his all qualities. He uses his body very well in tackles. He does not lose the ball and makes assists."

Arda, who joined Barcelona from Atletico Madrid during the close season when the club were barred from registering new players under FIFA transfer sanctions, made his long-awaited Liga debut in Saturday's 4-0 win over Granada. Messi took center stage with a hat-trick, although Arda had a hand in his heroics - crossing for the 8-minute opener and cleverly dummying a pass to Neymar in the build-up to the Argentinian's third.

Messi is the favorite to collect the fifth Ballon d'Or of his career in Zurich on Monday. Arda told Turkish newspaper Sabah: "I have never seen anyone like Leo Messi. He is a miracle from God. I like it when he does his things on the field. It's not jealousy - I feel good, for instance, when he nutmegs someone."

Having spent the first half of this season as an enforced spectator, Arda is keen to repay the faith shown in him by Enrique. "Luis Enrique [told me he] wanted me at Barcelona because of my ability to hold on to the ball, my desire for winning and hard work," he said, adding: "I will show everyone on the pitch why he wanted me at this team." Arda was a key member of the Atletico side that memorably pipped Barca and Real Madrid to the Liga title in 2013-14. Diego Simeone's men suffered an agonizing extra-time defeat to Real in that season's subsequent Champions League final. An injury sustained during the title-clinching final-day draw at Barcelona meant Arda was forced to watch on for a defeat that still rankles with him. "My only regret is not winning the Champions League when we were so close in 2014," he said. "We were only a minute and 20 seconds away from it. I tried so hard to be able to play in that final, but I couldn't despite all the injections and treatments."
RELATED TOPICS