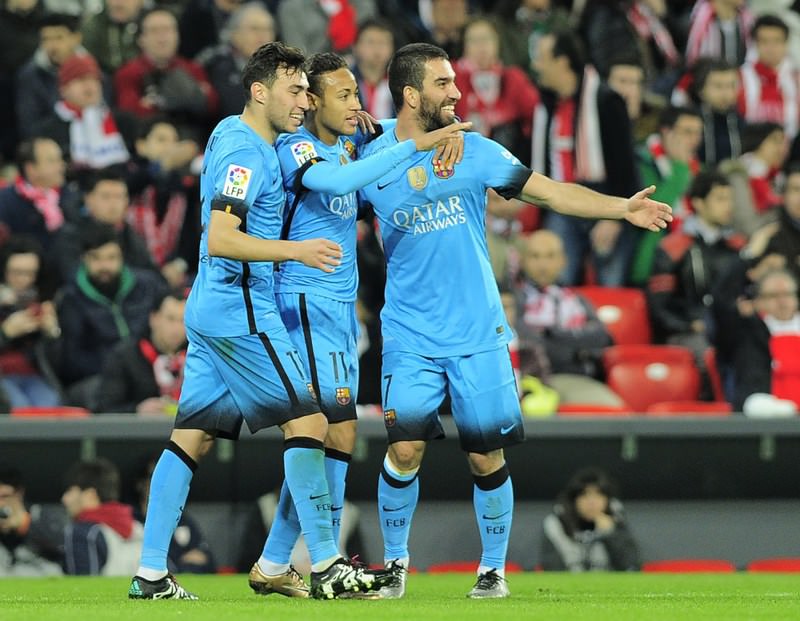 While Real Madrid's revenue of 577 million euros in 2014-15 kept them top of the Football Money League, Barcelona regained second place by generating 560.8 million euros, displacing Manchester United, which made $560 million

European champions Barcelona joined Real Madrid and Manchester United in earning over 500 million euros last season, financial consultants Deloitte revealed in their latest Football Money League published on Thursday. Madrid topped the table for the 11th year running with earnings of 577 million euros over the course of the season, driven largely by a 22.7 million euros increase in commercial revenue. Barcelona, buoyed by on-pitch success that included a La Liga, Spanish Cup and Champions League treble, climbed from fourth place to second place with revenues of 560.8 million euros, bumping United down to third. "For the first time, the top three clubs in the Football Money League have all passed the 500m euros revenue mark," said Dan Jones from Deloitte's Sport Business Group.

"FC Barcelona's on-pitch achievements in the 2014-15 season have translated to financial success. The European champions have climbed to second place at the expense of Manchester United, with revenue growth across all areas of the business - matchday, broadcast and commercial."

Barcelona's president Josep Maria Bartomeu told the Financial Times last month that the club aim to become the first to make 1 billion euros in a year by 2021. Their plans include a 600 million euros renovation of the 93,000-capacity Camp Nou and the opening of more overseas offices. Combined revenue for the top 20 clubs in the list rose 8 percent to 6.6 billion euros - a new record. German champions Bayern Munich fell to fifth, their lowest placing since 2006-07, with Qatar-backed French champions Paris Saint-Germain overtaking them following another year of growth.

Manchester City, Arsenal, Chelsea and Liverpool, from the all-powerful English Premier League, round out the top 10 along with beaten Champions League finalists Juventus. Juventus were joined in the top 20 by Serie A counterparts Roma, who climbed from 24th to 16th, but Italian heavyweights AC Milan and Inter Milan slipped to 14th and 19th respectively. United paid the price for failing to qualify for the Champions League in 2013-14, the first season following the retirement of legendary manager Alex Ferguson.

But the club's return to the competition under Louis van Gaal - albeit one that concluded with a group-stage exit - and a strong commercial operation could see them bounce back to top the list for 2015-16.

"The return to Champions League football, as well as the commencement of a number of significant commercial partnerships, will only strengthen the business in 2015-16," said Deloitte's Tim Bridge.

"With this in mind, it would not be surprising to see United top next year's Money League for the first time in 12 years, with the club forecasting revenues of around 650 million euros."

In total there were nine Premier League clubs in the top 20, while 17 of the top 30 revenue-generating clubs played in the English top flight in 2014-15.England's grip on the list is unlikely to weaken anytime soon, with new television rights deals worth an estimated 8 pounds billion due to kick in later this year.

Barca's undefeated run rises to five with Turan in the team

Turkish midfielder Arda Turan played in Barcelona's five matches, in which the team won all its games, after being sidelined for six months because of a FIFA-imposed transfer ban on the Catalan club. Barcelona made smooth progress in their bid for a fourth King's Cup triumph in eight years when Munir el Haddadi and Neymar struck to earn a 2-1 success at Athletic Bilbao in their quarter-final, first leg on Wednesday. The Catalan team has now won all five games in which Turan has featured, scoring 18 goals and conceding just twice. At Athletic Bilbao, the Turkish winger has a key role in the opening goal by playing the ball to Ivan Rakitic who setup Munir. Turan sent Rakitic clear down the right and his perfectly-executed cross was turned past Bilbao goalkeeper Iago Herrerin by Munir, his fifth in the competition this term. Barca have beaten Bilbao three times in the final since 2009, including last season, and the Spanish and European champions made light of the absence of Lionel Messi and Luis Suarez ahead of the return game at the Nou Camp in a week's time. Messi was rested as a precaution after coming off at halftime in Sunday's 6-0 victory at home to Bilbao in La Liga and Suarez was suspended for his part in a fracas after the last 16, first-leg game at Espanyol. Barca, the record winners, were up against a Bilbao side whose 23 triumphs, the most recent in 1984 against Barca, are only bettered by the Catalan club's 27.