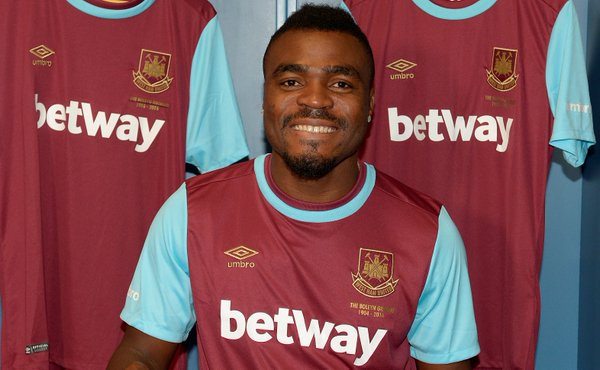 by Daily Sabah with Wires Feb 02, 2016 12:00 am
West Ham United have signed Nigeria's Emmanuel Emenike on 1 million euros loan until the end of the season from Fenerbahçe with an option to make the deal permanent, the Premier League club said on Sunday. If Emenike plays at least 10 matches in West Ham, the English club will have to sign him for 11 million euros. The 28-year-old has played 37 times for Nigeria, featured at the 2014 World Cup and was part of the squad which won the 2013 African Cup of Nations.

"I've known [West Ham coach] Slaven Bilic for years. When he was at Lokomotiv Moscow, I was at Spartak Moscow, then he came to Beşiktaş and I was in Fenerbahçe, so we have known each other for a long time."

Emenike began his career with Delta Force in Nigeria before moving to South Africa with Mpumalanga Black Aces and Cape Town. In 2009, he moved to Turkish football with second division Karabükspor, where his 16 goals helped the side to promotion.

He then scored 14 goals in the top flight with Karabükspor before a brief stay at Fenerbahçe in 2011 was followed by a switch to Russian Premier League side Spartak Moscow where he hit 24 goals in 51 games. A return to Fenerbahçe in 2013 led to the league title in 2014. Emenike was loaned to Al-Ain in the UAE last year, netting seven goals in just 11 appearances.
RELATED TOPICS