The sorrows of young Gary 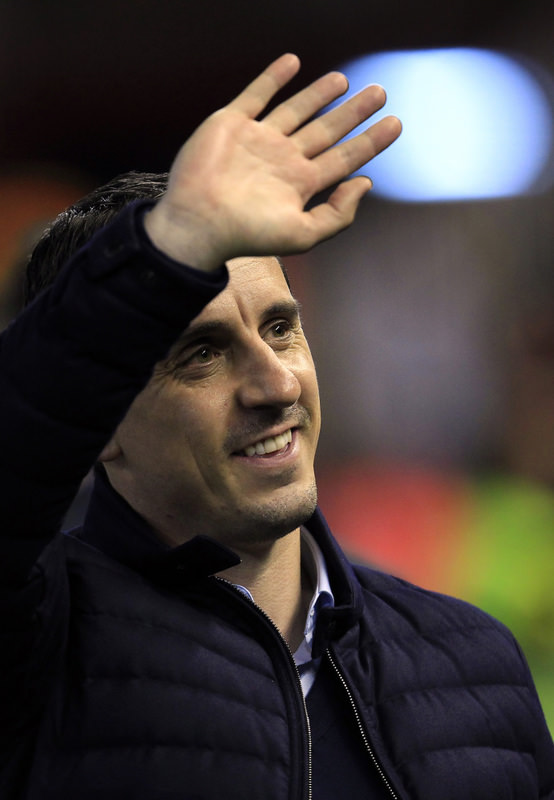 by Arda Alan Işık Feb 06, 2016 12:00 am
Before Valencia's historic humiliation against Barcelona this week, I wrote these comments on Valencia coach Gary Neville's (above)strategy exactly one month ago:

"Besides leaving four defenders completely away from build-ups, Neville does not let his players build a dominant and consistent game by relying on quick counters, another feature resembles Ferguson's game. In his golden age, Sir Alex brought this strategy to its upper limits by implementing a lethal counter attacking game with Carlos Tevez, Wayne Rooney and Cristiano Ronaldo. However, their kingdom did not last long, as the Barcelona revolution happened just after Manchester United's glory days and showed the whole world that a dominant, controlled and patient game is always a priori superior to quick, imbalanced and chaotic counter-attacking game. It seems that Neville refused to acknowledge self-sufficient power comes from controlling time and space via patiently circulating the ball among all eleven players."

Well, I do not like to say I was right, but I guess Valencia's 7-0 crushing defeat is enough to prove my point.

First of all, it is now obvious that Gary Neville has no sense of an subjective approach for offensive organizations and dependent on his opponent's game play. I was more skeptical about his strategy in the past, given he hardly found time to settle his strategies, but now everything is crystal clear. Gary Neville interpreted Valencia's problems in a completely wrong way and drove his team into a futile and dull way. The result is terrible, an obliterated once mighty Valencia eliminated from both Copa del Ray and Champions League, plus, in the relegation zone.

However, on the other hand, there are some people claim that Neville found himself in a poorly prepared and constructed team, and had no technical secretary to help him or no one to speak football. These might be true, but even though they are, if Gary had woken up an old Valencian from his lovely siesta in the middle of the day and asked him how he should play, he would have known that the worst thing he could do against Barcelona was to sit deep in the defense like a Cherokee chief.

Given Barcelona suppressed the magical trio's impatient nature about finishing by Arda Turan's transfer and returned to their wise game, the bells were tolling louder for Gary Neville. Nonetheless, some tricky football gods inserted that the genius idea of putting all players in defense into Neville's mind before the game, and actually convinced him that a divine intervention from the skies would bring the victory to Valencia. Otherwise, I cannot see how can such a well-known and respected football figure would humiliate his team with such a game play regardless of score.

Neville's press conference after the game was also a true tragedy given my Spanish colleagues were much merciless than I am commenting on the game. They asked three times if he would resign and after a moment they ignored Neville's resistance against the questions and in a sense pushed him to resign. Yes, that horrible game and the result deserved some crucifixions, but I have to say that I was kind of suspected about an oppressive media. Nevertheless, he should have showed some courage to play his own game no matter what, because this result left no argument for Neville to stay in that club for another day.
RELATED TOPICS