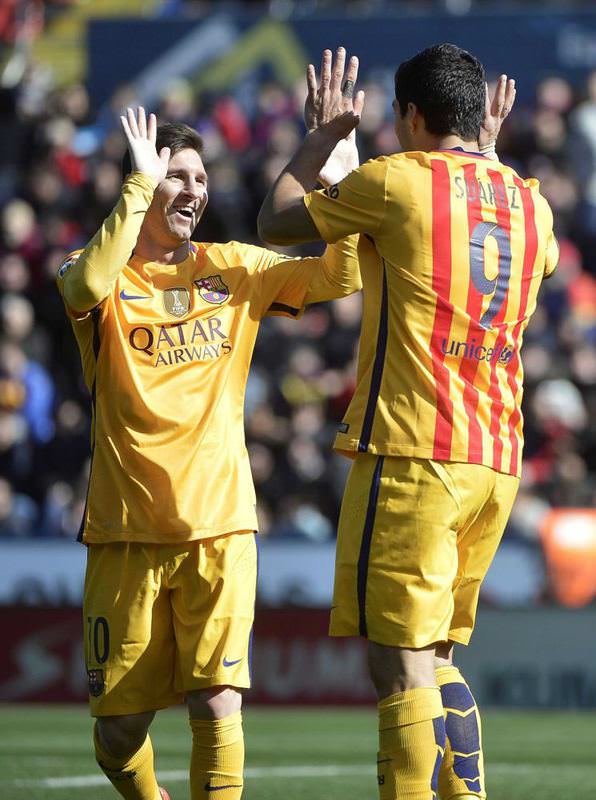 Barcelona enjoys a new streak with 28 games without loss after it wrapped up a La Liga match against Levante 2-0 yesterday.

Barcelona took the lead with an own goal by defender David Navarro in the 21st and sealed the victory with an injury-time goal by Luis Suarez to match the unbeaten streak set by Pep Guardiola's team in the 2010-11 season.

The result also kept Barcelona atop the Spanish league with 54 points, three more than Atletico Madrid, which defeated Eibar 3-1 on Saturday. Third-place Real Madrid is seven points off the lead going into its game at Granada later Sunday. Barcelona will have a game in hand at the end of the 23rd round this weekend.

It was the 10th win in a row for Barcelona. Luis Enrique's squad hasn't lost since a 2-1 defeat at Sevilla in the seventh round of the Spanish league in October.

Guardiola's team in 2011 went on to win the league by four points over Real Madrid. It also won the Champions League, beating Manchester United in the final a few weeks later. That unbeaten streak ended with a 3-1 loss at Real Betis in the Copa del Rey quarterfinals.

The Barcelona team coached by Rinus Michels in the 1973-74 season, which had Johan Cruyff in the squad, also hadn't lost in 27 straight games.

Barcelona faced difficulties against minnow Levante on Sunday in the coastal city of Valencia.

Although the Catalan club controlled possession, Levante was able to contain the attacking trio of Lionel Messi, Neymar and Suarez, whose goal came in the final seconds of the game. The hosts threatened on a few occasions and had some good chances to score, especially on counterattacks. The local fans gave the team a standing ovation at the end of the game despite the loss.

Barcelona's first goal came when Jordi Alba's cross from inside the area struck Navarro's back and bounced into his own net.

Suarez had few chances until finding the net with an easy goal following a breakaway just before the final whistle at the Ciutat de Valencia Stadium. It was Suarez's 10th goal in his last six matches. The Uruguay striker is the league's leading scorer with 20 goals, one more than Real Madrid's Cristiano Ronaldo.

Messi had a goal disallowed for offside after a great pass by Andres Iniesta less than five minutes into the game, though replays were at odds with the decision.

Barcelona was coming off a 7-0 rout of Valencia in the semifinals of the Copa del Rey. It has outscored opponents 34-5 in its last 10 games.
RELATED TOPICS