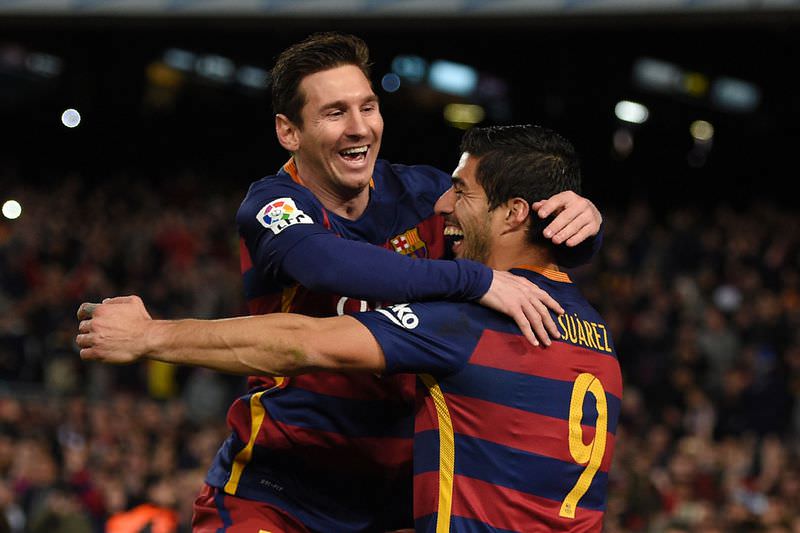 by Daily Sabah with AFP Feb 14, 2016 12:00 am
Barcelona maintained their grip on the Spanish title thanks to a wonderful Luis Suarez hat-trick to see off a spirited Celta Vigo 6-1 on Sunday. In the match, a rare trick was performed by Messi and Suarez, as the duo cooperated in a penalty rather than Messi sending the ball directly into the nets.

However, Suarez took over in the final half hour as he swept home Messi's fine through ball and before prodding home from point-blank range.

The best was still to come, though, as Messi passed a penalty into Suarez's path to complete his hat-trick before Ivan Rakitic and Neymar rounded off the scoring.

The most famous two-man penalty can be considered the one performed by Johan Cruyff and Jesper Olsen in 1982. Cruyff passed to Olsen from the penalty spot for Ajax in a match against Helmond Sport. Olsen passed back for Cruyff to score.

Nevertheless, the first of this kind of penalty was performed in 1957, through Belgium's Rik Coppens and Andre Piters against Iceland.

The final score was harsh on an under-strength Celta, who acquited themselves well for the first hour before being blown away by the magic of Barca's star front three.

Messi got a festival of brilliant goals started with a sumptuous free-kick from 25 yards into the top corner just before the half hour mark.

Yet, Celta reacted positively and after Bravo parried Claudio Beauvue's spectacular volley, the visitors were given a lifeline as Jordi Alba chopped down Guidetti inside the area.

The Swede missed a spot-kick as Celta bowed out the Copa del Rey semi-finals against Sevilla in midweek, but the former Manchester City and Celtic striker dispatched the penalty confidently into the bottom corner.

Barca started much more brightly after the break and Suarez hit the post following brilliantly wing play from Neymar just 60 seconds into the second-half.

The Uruguayan was more precise on the hour mark as he swept home Messi's scooped through ball first time into the top corner.

More magical footwork from Messi and Neymar left Suarez with an open goal to move back ahead of Cristiano Ronaldo as La Liga's top scorer 15 minutes from time.

However, it was his third that will be replayed the world over as after Messi was chopped down inside the area, he causally passed the ball into the path of the onrushing Suarez to slot home.

The party wasn't finished there as Suarez's lovely through ball was looped over Sergio Alvarez by Rakitic for the fifth.

And Suarez added another assist to a sparkling performance for Neymar also to dink the ball over the stranded Alvarez in stoppage time.

Atletico Madrid remain three points behind as they were 1-0 winners at Getafe thanks to Fernando Torres's first minute goal.

Real Madrid slip down to third, a further point adrift of Barca, who also have a game in hand on both clubs from the capital.

Atletico had a far more routine win at Getafe to remain in the title hunt.

Torres ended a five-month goal drought to net his 100th Atletico goal against Eibar last weekend and was brilliantly picked out by Yannick Carrasco's low cross to get the visitors off to the perfect start.

Atletico then held on to record their 15th clean sheet in 24 Liga games this season to leapfrog Real Madrid back into second place.

However, Diego Simeone's men did suffer a big injury blow when Carrasco hobbled off with ankle ligament damage early in the second period.

The Belgian international is now a major doubt for both Atletico's trips to PSV Eindhoven in the Champions League last-16 next week and the Madrid derby in a fortnight.

Elsewhere, Sevilla closed the gap on Villarreal in the battle for the fourth Champions League place to eight points with a 2-0 win over relegation threatened Las Palmas.

Second-half goals from Ever Banega and Kevin Gameiro overcame the Canary Islanders' resistance to register Sevilla's 13th consecutive home win in all competitions.

Basque minnows Eibar's brilliant second season in the top flight continued as they saw off Levante 2-0 to move up to sixth.

And Real Sociedad moved into the top half with their third straight win 3-0 over Granada.
Last Update: Feb 15, 2016 12:39 am
RELATED TOPICS