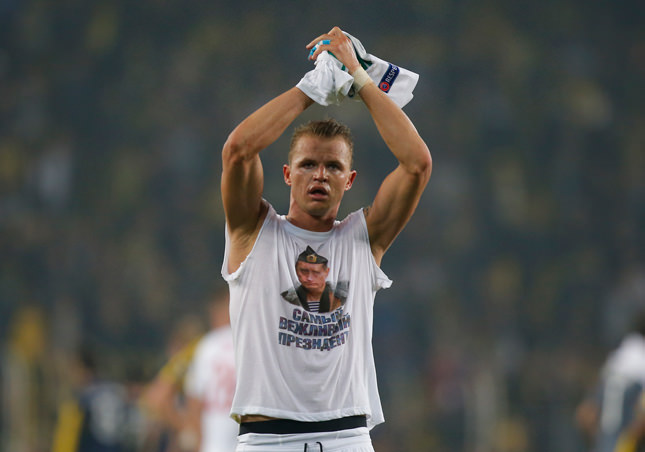 Lokomotiv Moscow is almost certain to face disciplinary action from European football's ruling body after its midfielder Dmitri Tarasov pulled off his shirt to reveal a portrait of Vladimir Putin and a slogan supporting the Russian president on his vest after Tuesday's Europa League Round of 32 match between Fenerbahçe - Lokomotiv Moscow in Istanbul.

Fenerbahçe won the match 2-0 but all the talk was if action against the Russian side would be taken because UEFA rules prohibit political statements at its matches and the laws of football ban players revealing images and slogans on undergarments.

Tarasov took off his team shirt to reveal the Putin vest after Lokomotiv played Fenerbahçe in Istanbul. Beneath the portrait of Putin wearing a Russian navy cap, the vest read in Russian: "The most polite president."

Tarasov insists he acted alone when he wore a T-shirt praising Putin, leaving the player and team facing an anxious wait over possible sanctions.Tensions between the nations have been high since Russia's military intervention in Syria on the side of President Bashar Assad but were heightened when a Russian warplane was shot down over the Turkey-Syria border by a Turkish F-16 at the end of November.

Since then, rhetoric between Ankara and Moscow has been openly hostile and Vladimir Putin's government has imposed a number of economic sanctions against Turkey.

"This is my president. I respect him and decided to show that I am ready to support him where ever I am. I wrote on this T-shirt everything that I wanted to say," Tarasov said after his side had lost 2-0 in the first leg of the last 32 encounter.

"In this case there has been a breach of discipline and a clear provocation," leading Russian sports news agency R-Sport quoted a 'UEFA source' as telling them.

"Tarasov could be disqualified and I mean for a long time, a minimum of 10 matches. Lokomotiv football club could also be punished for allowing this to happen."

State Duma Deputy and member of the Russian Football Union's executive committee Igor Lebedev slammed Tarasov for his actions, sarcastically commenting that the player had given a "wonderful present" to his club, himself and his fans.

"You can only say thank you for such as stupid gesture," Lebedev told R-Sport.

"I respect him as a footballer but this kind of action is unforgivable for a person of this level. Patriotism is not shown on T-shirts or on pictures...
"A 3-0 victory against Fenerbahçe would have been the highest level of patriotism and Tarasov would have been carried out of the stadium by the fans back to Moscow," he added.

UEFA has taken a very serious position against politically-motivated incidents at football matches in the past. In July 2015, European football's governing body fined Barcelona 30,000 euros ($33,438) after their Champions League final victory over Juventus. The supporters displayed banners with calls for Catalonia to gain independence from Spain.

Meanwhile, Turkish police detained three people after bottles were thrown as the bus headed for the Europa League match in Istanbul. Police said the three people were drunk and that one of the bus' windows was slightly cracked. Turkish media reported that those responsible were Fenerbahçe fans.